We have our own Marley. If you saw the movie or read the book, Marley and Me, you'll know what I'm talking about. Our Marley is Xena. She's half Bordeaux Mastiff and half Boxer. And Frank keeps calling her a him but then look at that face. Xena doesn't eat through walls but is pretty destructive in her own way. She's consumed countless earplugs and is totally undiscriminating in regards to color, size or shape. I've heard that some animals are drawn to the taste? smell? of earwax. Oh gross. But then dogs are kind of a gross lot. The love of earwax led Xena down a path far more destructive than earplugs. She chewed Frank's $5,000 hearing aids into a hundred little bits. Not sure how much of them she totally consumed.

There are no more dog toys in our house. Rusty used to have about ten when we first all moved in together. Xena made short order of them within a couple of weeks. Christie replaced a few, and she tried to make Xena understand that they were for play not destruction. We finally gave up. Rusty has one small squirrel that we keep in his space. Now and then, Xena sneaks in and carries the squirrel out to the living room. I've caught her in time so far.

A few weeks ago, she threw up for several nights in a row. A trip to the vet didn't solve the mystery, but his recommendations did calm the middle of the night disturbances.


Xena enjoys tormenting Debo, the cat. They have stare downs which Xena usually wins. I'm pretty certain she could annihilate poor Debo, but never makes a move on him until Debo moves. Then Xena performs the expected chase. She'd love to have a rough and tumble wrestling match with him, but Debo would come out on the bad end of that. Xena really wouldn't hurt a fly but is more powerful than she knows. 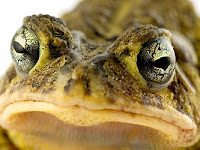 She licks toads. Would never hurt them. But that lick hurts her. The other night, she foamed at the mouth. There was so much foam, we gagged for her. She hung her head close to the ground as if in shame. Christie says there are toads that are poisonous to dogs. Would Xena eat a toad? Who knows but not this time. We found the culprit and figured she had licked him, causing the reaction. Now we're careful to keep her in sight after dark. She'd do it again. That's how Xena is.

By the way, we love this trouble-maker. She's loveable and loyal and the perfect dog - when she's asleep.

PS - If you drop by often, be sure and "join". No commitment, but I get a kick out of seeing you there!
Posted by Brenda Whiteside at 12:34 PM