Tortuga Thursday
In 2012, on the plains of Northern Arizona, two families joined forces and began the trials and tribulations of building a small family farm with nothing in the bank but love.
Grasshoppers this year are in locust biblical proportions. I exaggerate only slightly. Lance has tried every natural/organic way possible to get rid of them but they thrive. Although we've been much more successful this year at keeping the weeds down in the garden, a few other areas have gone ignored. Weeds harbor grasshoppers as well as other unwanted bugs so I went on the warpath. All good sized weeds met their end. The potatoes are the most bothered.

back. A bucket with some water and rotting onions set inside the greenhouse was the cure. Stinks awfully - I guess the bugs don't like it either.

The cucumbers are beautiful this year. The jars of Pirate Pickles look great. We perfected the point at which to harvest so there will be more pickles in each jar. Consistency is important and demanded by the head Pirate, Lance.

Some of our other veggies, like the zucchini, do not get the same manic attention. Most of the zucchini goes in the dogs' food so we aren't that concerned about size. You zucchini lovers out there are probably screaming "what?" but, yes, most of it goes to the dogs.

Like tonight we had grilled veggies which is about our favorite on Tortuga. If you haven't purchased a grill pan for vegetables, you really should. Tonight we had zucchini, yellow squash, onions, bell peppers, kohlrabi, and patti pan (the patti pan and yellow squash from our neighbors and the rest from our garden). Cut the vegetables in chunks or thick slices, toss in a bowl with olive oil and lemon pepper and grill on the barbecue for about 45 minutes. Sooooo good.

The monsoons continue. The wind is the killer. We've lost about 30% of the cayenne pepper plants to the
storms. The rain has been great for the crops but the wind is bothersome. We're a windswept prairie. We are very happy to have the rain because the Big Chino Aquifer was in desperate need of replenishing. Wouldn't want the well to go dry.

In case some of you don't know about our Pirate Pickle web site, here is the link. Hope you check it out.
http://www.piratepickling.com/

And we now have a Tortuga Flats Farm Facebook page. Please drop in and "like" us!
https://www.facebook.com/TortugaFlatsFarm

"The book’s strength is in its characters and descriptions… The setting was a character in itself. I loved the town! The author really made it come to life, not stinting on details (but not boring the reader either)… the writing kept me turning pages and I never once thought about setting it down."

This is a partial quote from Long and Short Reviews for The Art of Love and Murder. And they aren't the only one to comment on my setting for the novel. What a compliment. My stories are always character driven so it made me stop and think that maybe my settings are another character.

I start with real places; use a little reality and a lot of imagination. When I write a scene, I put myself there, look around and decide just how much is needed to put the reader beside me. It's happening here, now! You've all read books where they go on and on about every little detail down to the color of the pen on the desk. Not my kind of book.

Some times I throw in brief descriptions throughout a scene to make a picture. For instance, from chapter one of The Art of Love and Murder:

Her head swung side to side, but the empty street and sidewalks could have been a ghost town. In the distance, a jazzy tune drifted through the air with voices too far away to help.

“Breezeway? Yes, well, it’s not like it’s an alley for Pete’s sake, with trashcans and rats.” She glanced back at the darkness she’d escaped. “It’s paved with brick, and the doors have signs on them.

Thin-soled sandals didn’t help her wobbly knees on the cobbled cement, scored to look like stone…

When she reached the Monte Vista, she climbed the steps, took hold of the ornate, brass door handle…

Ahead, on the corner of the breezeway and Santa Fe Street, the sounds of the Lumberjack Brewery invaded the night…

He passed the back entrance of the Kachina Café, the rich smells of Mexican food drifting into the air from the plates of the people sitting at the patio tables.

Once known as Route 66, businesses, bars and shops flanked one side; the railroad tracks skirted the other.

He turned on his heel, retracing his path back up the breezeway. He’d left his Cherokee parked not far from the Monte Vista. He’d eaten dinner at Jane’s Whole Earth and had a beer with a friend at the Broken Arrow.

Other times, I do interject longer (but not too long) descriptions of the setting:

The short flight of stairs challenged her as she trudged, tiredly pulling each foot up to the next step. The floral carpeting, narrow hallway and gold patterned wallpaper transported her back in time. The renowned hotel, beautifully restored, reflected the era of the 1920’s. The antiquated wall lamps dimly lit the hall, casting warm shadows of the past. She walked the hall that many famous people had traipsed in the last century.

That's my take on world building, creating a setting that adds to the character of the book. If you'd like to read the entire novel, you can purchase both eBook and print book at numerous on line book stores, such as: The Wild Rose Press   Amazon   Barnes and Noble  ARe

Posted by Brenda Whiteside at 9:19 AM 2 comments:

Email ThisBlogThis!Share to TwitterShare to FacebookShare to Pinterest
Labels: Discover Yourself, Muse Monday, romance, setting, suspense, The Art of Love and Murder

WORLD BUILDING –Who Needs It? by Lynda Coker

As a writer, I learned early that creating a believable story required architectural and construction skills. The second thing I realized was that I didn’t have a clue what World Building meant, how to begin, or when to stop. And most disturbing, was how my own writing style predicted dark days ahead.
You see, I write by-the-seat-of-my-pants. I do some plotting, but mostly, the story just evolves one weird, funny, amazing, or awful idea at a time. Thankfully, these ideas do eventually merge into a story that previously only existed in my mind, a world with its own reality and principles of existence.
So World Building is not something I consciously and meticulously predetermine, rather, I construct what I need when I need it. (*Smiles precociously) That’s not to say that a lot of building repair isn’t required in the editing process. (Woe is me!) After all, two things are definitely needed to make World Building concrete that is strong and durable—Coherence and Consistency, which miraculously appear during editing
As a reader, I don’t enjoy being bogged down by endless description. For instance, I don’t need to see the blueprints for a 33 room mansion. Just tell me it has 33 rooms including tennis courts, swimming pool, and riding stables and let me put it all together in my own mind. I guarantee, I’ll like my mansion better than the one you describe to me in full detail!
So what’s my point? In World Building, I try to construct only those features that are necessary in order to understand the rules or laws which govern my world, the environmental territory, time and space, new technology, and the characters that people my world along with their philosophy, language, etc. As a writer, I do the framework and allow you, the reader, to decorate so-to-speak. In reality, my world also becomes your world through participation. 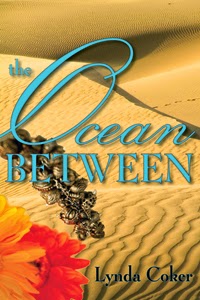 Blurb:
THE OCEAN BETWEEN by Lynda Coker
Between the skyscrapers of New York City and the ancient sands of the Middle Eastern nation of Ahalamin lies an uncharted ocean, not of water, but of culture and prejudice.
When financial executive, Victoria Ballard, is tricked into marriage with a Prince of the Desert, her perfectly designed life unravels. To put the pieces back together and claim the heart of a Prince, she’ll have to find a way to bridge The Ocean Between .
Book Video:
http://www.youtube.com/watch?v=WvtCCEoOTDE
Buy Links:
AMAZON
THE WILD ROSE PRESS

Excerpt:
Rashid took the stairs two at a time. Identifying
The source of the problem did not take long...the
verbal tirade echoing through the lounge came from
his private compartment at the rear of the plane.

“Let me out of here! I’m an American citizen and
this is kidnapping. I’ll have you all arrested and
executed for this! I’m warning you, Califar. You tell
that unscrupulous, deceitful, desert creep to get back
here and let me go!”

Rashid took a step forward and then paused.
The sudden cessation of verbal ranting was more
unnerving than the previous clamor. The pregnant
silence made the hairs on his arms stand erect. With
this woman, he was certain the calm was a precursor
to worse atrocities. He hoped he was wrong and she
had exhausted her vile temper instead. The thud of a
solid object slamming against the other side of the
door ridiculed his supposed control.

He yanked off  his robe and headdress. Slinging
them toward the back of a chair, he barked a
command to his two bodyguards.

“Give the pilot orders to depart...NOW!”

Both went forward to deliver the message,
almost jamming the small doorway in their attempt
to pass through at the same time. Consumed with
his own anger, he could not find any humor in the
speed with which they fled one loud, but small
woman. He wondered about the quality of his
personal security.

Spearing Califar with a glacial look, he
motioned him forward. “You will ignore any sound
you hear from the other side of that door.
Understood?”

“May I speak frankly?”

Rashid stiffened. “If you must.”

“This woman you’ve made your wife is a
stranger to you and to our customs. These are
extreme circumstances for her. Despite her less than
respectful manner, she is still deserving of the gentle
persuasion you always accord the women in your
life.”

“Are you telling me how to treat my wife?”
Rashid lashed in reply.

“As your servant...never,” replied Califar. “As
your friend...I offer a reminder. Guard well your
actions this night and remember with what care you
have always protected what is yours.”

“I will deal with the princess in whatever
manner suits me,” growled Rashid.

Posted by Brenda Whiteside at 3:00 AM 8 comments: