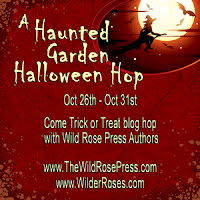 My blog today is part of The Wild Rose Press Haunted Garden Halloween Hop. You can win prizes and enjoy fall, Halloween and have a little fun. You are now trick or treating on my blog. Read on, leave a comment and you could be the winner of the treat - candy of course! BE SURE TO LEAVE YOUR EMAIL IN YOUR COMMENT!!


I'm supposed to write about something fall related and with all the harvesting done and fall clean up in full swing, the timing is good. I thought I'd share some of the highlights of our past year becoming prairie dwellers and small farmers.

It's been one year this month that Frank retired, we bought a home on acreage in Paulden, Arizona and had no idea what we were in for!

If you haven't been following my prairie posts from the beginning, you might not know why we embarked on this new lifestyle. In the first post, I explained it. And then the farming began. So here goes:


What do you do for retirement when the main financial contributor to the household has been out of work for three of the last five years - thanks to the not quite a depression of the last several years - and your retirement accounts have been cut in half due to the same state of affairs? I ask this question knowing so many others have found their life to be in the same fix. Do you work until death do you part? After considering that, we said no.
Two years ago, in the midst of wondering what the last half of our life would be like, my son, Lance, called and proposed we join forces, create our own little commune. Oh, I liked that - always wanted to try that life style way back when. After considering the pros and cons of living under the same roof as our son and his lady, we came up with a plan to do just that.

June 2012
Farming is not for the faint of heart or weak of limb. Although, Lance is the lead in the vegetable garden and does ninety percent of the work, the other ten percent leaves me exhausted at times.

So now we can add Blister Beetle to our list of pestilent visitors which includes frost (killed eighty tomato plants, damaged the potato plants, froze off the flowers from the peach trees, apricot trees and blackberry bushes), wind which threatened our baby pepper plants and tomato plants, tiny black bugs that nearly destroyed all of our spinach, broccoli and rendered our radish tops really ugly.


I've been the messenger of death lately - or actually the hand of death. Waging war against weeds is an endless effort, and today I got serious. I took the weed eater to the garden. The heck with hand-pulling in this heat.


I'm so excited about the garden today. We're seeing even more vegetables make it to our table and promises of more to come.


It's windy here most days at least by mid-morning. But one evening the wind blew so hard we feared for the veggies.

Meanwhile, several things are ready to harvest and we're getting overrun with veggies. We have fourteen more grocery bags of peppers, patty pan, and zucchini sitting in the kitchen waiting to be blanched and frozen. In the fridge, there are bags of purple green beans and okra waiting for the same fate. (side note here: I love okra, the slime factor when blanching it to freeze can make me gag)


September 2012
Harvesting continues. With lots of sneezes and wheezing. Neither Christie or I were bothered during the typical spring allergy season that plagued us in Phoenix. But August and September have been miserable if we work too long in the garden.

Frank is wondering if he really is retired. Working the farm, keeping up the house and all that goes with it - not much time for the front porch rocker. And right now with all the crops coming in, none us of are twiddling our thumbs. Lance is now calling his dad Pickle. He's getting pretty good at canning pickles and relish.

October 2012
These final harvested veggies aren't pretty. They're survivors, and I'm sure they still have plenty of nutrition.

To celebrate the fall harvest and the Halloween season, I'm giving away candy - trick or treating blog style. And not just any candy but See's Halloween chocolates. Leave a comment between October 26 and the 31st and I'll enter your name in the drawing. Check out these other blogs during that same time period and see what goodies they're giving away. Good luck!

Posted by Brenda Whiteside at 6:00 AM 48 comments: