Double meaning on that title. Got the cover for my contemporary western for The Wild Rose Press ebook due out next year which brought the title to mind, and I'm packing to move so...

I really hate packing. It doesn't matter if I'm going away for two days or two months, it's an excruciating process for me. This pack is worse (worse than excruciating?) because it's three trips rolled into one. I'm packing for a drive to Arizona for a three week Christmas vacation AND for an additional three weeks there while my husband flies back to Minnesota AND packing as much as we can bring on this drive for the permanent move. I'll miss out on the final pack that he'll undertake on his own, but still! Poor me.

Normally, I'm this over organized, obnoxiously detailed person, but for some reason if you put a suitcase in front of me, I fall apart. Each item becomes a major decision on whether to bring it. Packing is the one area of my life I procrastinate. I'm the person who has her Christmas shopping done by Thanksgiving and in the mail the first week of December. You'd think for a major move like this, with only four days until we leave, I'd be standing at the door, bags packed. I wish.

So today, I'm really going to get serious about packing. I'll stop standing over the empty suitcases and boxes and actually put something in them. I'll get past the staging area, quit tripping over all the piles of maybes, definites and what-are-these, and actually put them in a box.

But first I'll have another cup of coffee, write a bit on my book and think on it a while.
Posted by Brenda Whiteside at 5:20 AM 2 comments:

Party With a Purpose

Tonight is the first holiday party. This is the annual HAMA (Holiday And Member Appreciation) party. The club is called StMinneSomePlace in Paradise Parrotheads. Don't know what a Parrothead is? Ever heard of Jimmy Buffett? Those of us that like his music are called Parrotheads. My husband and I first hooked up with the club when we moved to Minnesota. We were having an awful time making friends, and we happened on an article on the Internet. And so began our base of friends. 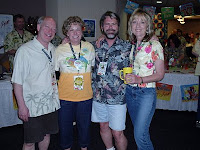 Parrotheads like to party, sing Buffett songs, act perfectly silly and some are given to wearing outlandish get-ups. But our motto is "party with a purpose" which means whenever we gather, one or more charities benefit. Even tonight's party, which is meant to thank all the members with gifts and fun, will have a thread of charity. We'll be collecting tots for toys, food for the food bank and probably something else I'm not even aware of. 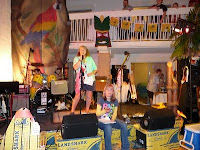 We've booked a good portion of a hotel. Many of us will spend the night - always recommended when there are margaritas flowing freely. There will be food, music and merchandise. Mostly there will be lots of fun and silliness. But behind it all will be the idea of charity. It's that time of year. With the Parrotheads, it's year-round, I'm proud to say.

If you're starting your holiday partying this weekend, have fun and be safe. And if you can, give to someone who isn't so lucky to be able to party.
Posted by Brenda Whiteside at 9:38 AM 2 comments: