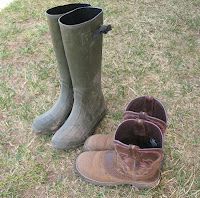 I had set aside some money for work shoes - trudge around the farm work shoes. Frank and I were true to form in our choices. He went cheap with knee high rubber, Walmart specials. I had to have a little class and bought much more expensive Justins. But I did get them on sale! Both our choices are standing up well and doing the job. I just look better. LOL 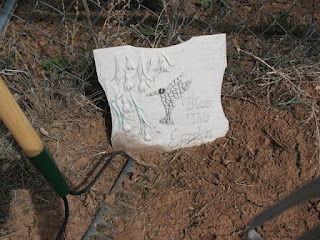 We inherited a few things when we bought this place. Of course there were the fruit trees, tulips and lots of dirt, dust and weeds. But out in the soon-to-be vegetable garden was a lovely plaque with a great sentiment. It now resides by the gate between the veggie garden and the blackberries. I rescued a frog they left behind. He's metal and sitting on a double sided park bench. His partner was beyond rescuing - missing a limb and part of his nose. I gave the little survivor a spray paint job and brightened his umbrella. I think he adds to our soon-to-be yard.

Xena is our digger. Not sure how we can break her once the yard is in - any ideas? She also finds things to eat that she shouldn't. Last week she kept throwing up. The frequency increased until one night she did it four times. Lance and Christie didn't get much sleep. They broke down and took her to the vet. Dang those vet bills. But a strict diet and some meds brought her back to well. She had some sort of stomach bacterial thing going on. I love dogs. I better with three in and out of the house, but potential vet bills are a hazard. Rusty will be nine in October. Here's hoping he stays well.

Have I mentioned the one good thing about Frank passing sixty-five? Discounts! We shop at a market called New Frontiers in Prescott for all our organic and natural foods. He gets a 10% discount because of his mature age. Really helps a bunch. And movies are $5. One drawback on the movies here; there is only one theater in all of Prescott and Prescott Valley. Not much to choose from. In fact, we haven't been to a movie in two months. Thank goodness for the Red Box. Frank also gets a discount at Home Depot because of his veteran status. That 10% has saved us mucho Denaro.  He's learned to ask no matter where we are shopping or eating. You'd be surprised at the discounts and freebies available. 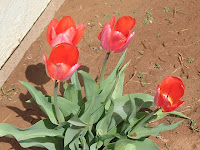 We've come to the conclusion that Pauldenites and Chino Valley residents aren't much on night time activities. And if they do, most must go into Prescott. Last Saturday night we went out to the Cattle Company and had the place to ourselves. Lucky for us, Lucky Luke took the stage. He starts playing in the restaurant at 6:00 and when that thins out around 7:30, he moves to the bar (which closes at 9:00! Yes, really). Luke is German. In the restaurant he played country western, but when he moved into the bar we were treated to rock songs with a German accent. Luke is a slim, good looking man with gray hair that falls below his shoulders. He wore a cowboy hat, red western shirt and boots. His belt buckle was pretty big. He has a good time, and we had fun with him. And how can you beat $2 beer and margaritas?

And the big announcement - we've named our place. I think Lance pretty much came up with it. Tortuga Flats Farm It sort of says we hope our lifestyle is slow and lasts a long time plus the whole pirate reference suits each of us for a different reason. Pirates are romanticized, and we like that. Frank and I are Parrotheads so the Caribbean reference is good too. Tortuga Flats Farm!
Posted by Brenda Whiteside at 10:01 PM