I planted twenty trees with the help of Frank. He helped me dig some holes, and he dug out a couple of the stubborn suckers. The apple, peach and apricot trees all had suckers. I managed to get twenty of them out and planted. They have a 50/50 chance of survival but if only ten survive, I've saved hundreds of dollars.

Many of the trees are budding out. Last night we (well not we - the guys) covered several of the trees. The temp dropped below freezing again. This climate is a challenge. The wind has been hellacious so the flowers could get blown off too. Lots of challenges. All part of the fun this first year. We'll see how we feel about these challenges next year. 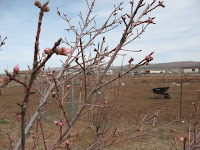 A neighbor walked by one day, Eunice, and offered to help in anyway she and Dave could. Turns out they're from Buckeye, Arizona and knew the Gillums. The Gillums, now deceased, were good friends of my parents and have the statue of Hobo Joe on their property. The Hobo was made by my dad and there's a plaque on it dedicated to him. I love when these connections happen. That's another subject I should elaborate on one of these days. So Lance has been using their tiller in the garden. We were going to rent one for $70 a day. We had no idea how long it would take and now that we know - wow! have they saved us some money. In fact, I don't know if we could have done it. Lance has been at it for four days now and still not done. People are great out here. Bob and Jeannette, more neighbors, have brought us two truckloads of horse manure for the garden. 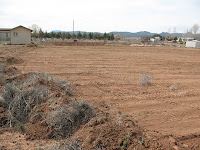 We did pay to have the area on the other side of the blackberries cleared where we will plant potatoes and corn. Doug brought his tractor out and had it done in three hours. It was worth the $145. Hand clearing would've taken a couple of weeks more than likely. 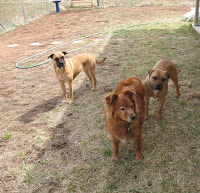 We pick and choose our expenditures. We had the flagstone debate. I really wanted flagstone for our needed walkways around the property. First off, Frank and Lance pointed out - who the hell is going to load and unload and carry slabs of flagstone around the property???!!! Okay, guys, I see the point. So we've (no they) came up with an alternative plan. In certain areas we will use stepping stones like are already here in a couple of areas. We have to have an area for the dogs to inhabit while the grass is seeding and growing. Frank has sectioned off and is fencing a spot behind the garage. So they are going to put a walkway of gravel-stone from the house to the dog run. We can get ten tons of gravel for $260. We have no idea how much that is but it sounds like a lot! We need it out front anyway. There is an area between our fence and the dirt road that is pretty much mud for weeks after rain or snow. Can't wait to see our mountain of gravel when it arrives.

I have a built-in yoga teacher. Christie has been practicing yoga for a few years now and can put her body in positions that would make a yogi proud. She'd like to teach some day, so I suggested she practice on me. Yes, I'm saving money! And she's more than willing. So we have 'class' on Mondays and Thursdays at 10:30. On those days, I write until class and, after, go outside to work in the gardens. Yoga class in the middle of the living room has its drawbacks - the dogs sometimes want to join in and the males in the house don't always respect our time. It's hard answering questions when you're in downward facing dog position.
Posted by Brenda Whiteside at 10:01 PM