Look What Happened While I Was Gone! 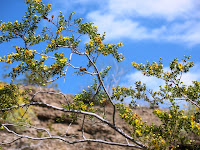 While we were in Laughlin, NV enjoying spring in the desert, things were happening on Tortilla Flats.

Tiller is kaput! It will cost more to fix than buy a new used one. Apparently, it had damage when we got it but no one saw that. Luckily we don’t need another until next year. Yea!

Greenhouse is nearly done. The door has to be finished and the exhaust fans installed. Can’t wait to see it operational. 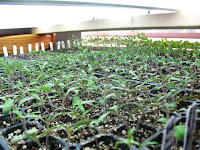 The plants on the tables in the house are getting big – at least I can see them now. In a few weeks they’ll go out to the greenhouse.

The first tulips opened. Always a good sign. I just wish they would last longer.

We have a couple of fig trees – we think. A neighbor told us that’s what they are. Last year they didn’t bloom and in fact were barely hanging on for dear life after the neglect they’d had from the house being empty for a year. This year we have flowers starting! Hopefully they aren’t blooming too early.

Which is what the pear trees could be doing. Last year we didn’t have any pears or peaches because they bloomed in April. We had a freeze in May. It isn’t unusual for a mid May freeze here. Our plum tree last year had ONE plum. This year it already bloomed and died because of cold nights. So sad.

That’s a quick update. I’m off to the doctor at the Indian Hospital in Phoenix. My knee continues to give me problems and I better find out what’s wrong before I have to spend a lot of time stooping and bending to weed.

P.S. Sadi is really growing leaps and bounds. I sold a Rosette to The Wild Rose Press. Satisfactory news all way round. And if I don't respond to your comments right away, I'm on the road headed back from Phoenix.
Posted by Brenda Whiteside at 6:00 AM