Seeds Are in the Dirt! Tortuga Update.


It's getting clo...ose! The irrigation drip lines are going down. Most of the main garden is finished. The potato and squash rows won't go in until we actually plant. Three rows of seeds are planted - carrots, spinach, radishes and - oh gosh, I've forgotten. Everyone is in bed as I write so I can't wake up the hard working farmer to confirm what seeds he planted. 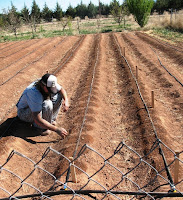 It really is exciting to see the changes between this season and our first season last year. Lots of lessons were learned. My guess is there will be more.

The babies are out of the house - baby veggies. They've been moved into the green house. Unfortunately, the temps started dropping at night after we moved them out. A few have frost bite but I don't think we'll lose them.
Now, and until it warms up at night, they are moved into the garage when the sun goes down. It's a pain because we have quite a few trays and they're getting big. A week or so more and we should be clear to leave them in the greenhouse. 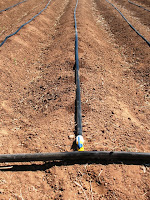 Another new trick this year is planting marigolds in with some of the crops. Marigolds are a natural deterrent for unwanted bugs. And an added benefit is they attract butterflies. 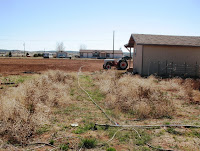 Update on the Tumbleweed Wars. This picture is of a couple of the blackberry rows. Can't see any blackberry bushes? They're totally choked with tumbleweeds. After last weeks big burn, this week was even bigger. We burned four piles as big as the one pile last week. I really hate tumbleweeds. Getting them out of stickery blackberry bushes is really fun. In the process, I took a large blackberry thorn in my ring finger. Since it pierced my glove, it was hard to get out. My finger swelled so badly, I couldn't get my ring off. And it hurt!

Lastly, I'm happy to report my baby trees are adding more leaves.
Posted by Brenda Whiteside at 6:30 AM