Laura has introduced us to several genres she writes. Today is the third and particularly interesting because I'm not sure what SteamPunk is. How about you? Please give us a lesson, Laura! 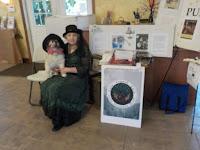 If I had a nickel for every time I’ve been asked this question, I’d be a wealthy woman indeed. Usually, when I confess that I write Steampunk Adventure novels, people tend to look at me with a puzzled expression, perhaps wondering whether I also sacrifice goats on weekends or whether my tattoos are all safely hidden beneath my clothing. I can almost hear them thinking, “Wow, but she looks like such a normal lady.”

And I always feel as if I’ve been put on the spot. Despite all the times I’ve been asked, “What’s Steampunk?” I’ve yet to come up with a perfect answer. Perhaps that’s because Steampunk means different things to different people.

Here’s how the Urban Dictionary defines it:  Steampunk is a subgenre of speculative fiction, usually set in an anachronistic Victorian or quasi-Victorian alternate history setting. It could be described by the slogan "What the past would look like if the future had happened sooner." It includes fiction with science fiction, fantasy or horror themes.

For me, Steampunk is more a feeling than a definition. It’s a dark and misty place in my mind populated by folks who might have escaped from one of the more troubling Dickens novels, with a hint of Sherlock Holmes and a seasoning of black humor. Wrap that all up in an atmosphere of steam-powered everything from airships to automatons, and you’re getting close to what I think of, when I think Steampunk.

Fans tend to get into varying aspects of the genre. Some like the mechanics of it—they want to create their own gadgets, and claim their own realities. Others fall for the costuming—think Victorian gone on a wild weekend with Gothic. For me, it’s all about the characters. What sort of people would inhabit such a world? Would its mechanics affect them? How?

When I first set out to write a Steampunk Romance, I thought I’d set it in London, like so many other Steampunk tales. My daughter, who lives in Buffalo, New York—city of my birth—suggested I set it there instead. Upon thought, I had to acknowledge that Buffalo offers everything I love about Steampunk—strength and grit and an industrial past, people who as the sons and daughters of immigrants tend to look at the world a bit darkly, and who never, ever give up. And so the world of Buffalo Steampunk Adventure was born. I and my readers have traveled back again and again. Come visit, if you dare!

Clara Allen needs a husband in order to keep a roof over the heads of her assorted dependents, a roof her nasty grandfather will re-appropriate unless she is married by her 21st birthday, only a few days away. Strong-minded, unwilling to take orders from any man, she decides to solve her problem by raising a murdered prisoner from the dead and marrying him. She expects an empty-headed puppet; she certainly never dreams he’ll be so devastatingly handsome.

Liam McMahon doesn’t recall much about his life before his hanging in the prison yard, other than being Irish. He does remember the kiss Clara bestowed as she brought him back to life. Every time he looks at her, his desire gets out of hand. But his former life is chasing him down like a steam engine, and when a couple of mad geniuses decide he’d make a fine experiment, he wonders if he’ll live long enough to claim Clara’s heart or if he’ll die all over again.

Author bio:
Born in Buffalo and raised on the Niagara Frontier, award-winning author Laura Strickland has been an avid reader and writer since childhood. She believes the spunky, tenacious, undefeatable ethnic mix that is Buffalo spells the perfect setting for a little Steampunk, so she created her own Victorian world there.  She knows the people of Buffalo are stronger, tougher and smarter than those who haven’t survived the muggy summers and blizzard blasts found on the shores of the mighty Niagara.  Tough enough to survive a squad of killer automatons? Well, just maybe.