Dee is fearless for sure. When she says "this might not seem very fearless", I answer "oh yes it is!" 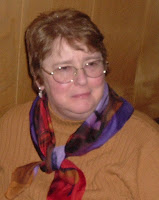 Growing up, I never considered myself fearless. Far from it, in fact. Maybe because I had polio as an infant and my left leg was affected to the point that I wore braces until I was in my mid-teens. Despite that, I learned to roller skate, ride a bike, learned to dance, and took part in most everything else kids do. So maybe my mom instilled some fearlessness in me while I wasn't looking. I went from a mom who made me get out and do things to a husband who rarely took no for an answer when it came to adventure. I like to say that between them—my mom and my husband—they thought I could do anything. Even things I didn't particularly want to do! And that leads me to my most fearless action.

I am a creature who likes stability. I'm fairly risk-averse. So when hubby came home from work one day and said, "Remember all those years while we were dating I said I thought we should drive a truck? Well, I wasn't kidding," I didn't quite know what to think. But I'd watched the big rigs go up and down the highways and I'd suffered from wanderlust for years so I said, "Why not." In a matter of weeks, stay-at-home me packed up the items we wanted to keep and stored them in my in-law's attic. We sold everything else, let the apartment go and set off for Home Transportation in Marietta, GA. This might not seem very fearless unless you consider that I had never been inside a big rig, much less had driving experience. Remember what I said above? I was raised to believe I could do anything, and I had no doubts that I could handle driving a tractor trailer.

Well, we had a few setbacks. Hubby went out by himself for six months or so, but then called me back down. I went through "truck school" (this was before the national license and testing that we have now), had the physical—which I almost didn't pass because of the residual effects of the polio on my left (clutch) foot and leg—and I went, fat, dumb, and happy, as my mom would say. Hubby taught me how to drive by making me practice when and how to shift the truck's fifteen gears in the company parking lot. Then off we went, like we knew what we were doing. That was the start of eight fabulous, fun years driving throughout the U.S. and parts of Canada. In probably a quarter of a million miles of driving I never had an accident or a ticket. Had lots of laughs, though, and many days of hard work. Being fearless was definitely worth it!

A few years ago, Dee S. Knight began writing, making getting up in the morning fun. During the day, her characters killed people, fell in love, became drunk with power, or sober with responsibility. And they had sex, lots of sex. Writing was so much fun Dee decided to keep at it. That's how she spends her days. Her nights? Well, she's lucky that her dream man, childhood sweetheart, and long-time hubby are all the same guy, and nights are their secret. Find Dee on https://nomadauthors.com and read about her books like her latest, Naval Maneuvers. Contact Dee at dsknight@deesknight.com.

Find all of Dee's books HERE
Posted by Brenda Whiteside at 12:30 AM