The Baby Arrives: A Story of Heaven and Hell The last time I posted was March 4th. On March 5th all hell broke loose, with a big piece of heaven to balance it. According to the birthday book we have, March 5th is the day of heaven and hell. Our sweet Sadi Belle Whiteside, my first grandchild, entered our lives that day, and her birth date lived up to the hype.

All farm matters went on hold. All writing projects were suspended.

My daughter-in-law started labor at 6:00 am, March 4th. They admitted her into the birthing center that night about 10:30. We hung by the phone, but the night passed. On March 5th, we joined her parents in the waiting room vigil at the birthing center.

A little background: this had been one of the easiest pregnancies I'd ever witnessed. But then Christie is in amazing shape. She is a yoga practitioner, walks every day and eats incredibly healthy. She was bound and determined to have a total, no drug, natural delivery. Every indication was that she would.

Okay - so - by the afternoon she was not progressing. Her back pain was so great she couldn't relax enough. She and my son finally agreed to an epidural. She quickly went from four to ten. Labor continued with my son coaching and Christie pushing. Then the contractions lessened, a side affect of the epidural. Unhappily, they consented to an inducing drug. But after over three hours of pushing, Sadi was stuck. The doctor rushed her in for an emergency C-section. At 5:24 pm, we had a beautiful granddaughter. The doctor said he'd never encountered this problem before. Christie has an odd shaped bone which turns in instead of out restricting the birth canal. Sadi's head stuck and she had the bump to prove it afterwards. Once they had her out, all seemed well. She immediately nursed, and Mom was beaming. An hour later, hell broke loose. By the time Christie made it back into surgery, she'd lost half her blood. It took eight units to get her through this. She'd pushed so hard she'd torn her cervix in two places. The surgeon did an amazing job of saving her and her chances for future children. We nearly lost her, and each day one of us tears up with the memory. 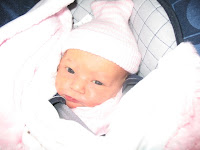 After several days in the hospital, Mom and daughter are home and doing fine. Christie has many weeks of recuperating to get through, but she's looking stronger each day. Sadi is a happy baby who is gaining weight and already has grandma and grandpa wrapped around her finger. 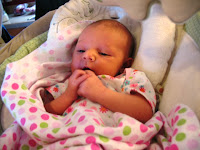 Yesterday was the first day we'd been able to turn some attention to the farm and me to my writing. I've just about finished trimming the blackberry rows. Frank and Lance got the supplies to build the green house. The watering system is on order. We couldn't wait any longer so we're funding it with credit. We hope to have two commercial crops, and I'll elaborate on that in future blogs. 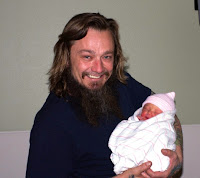 For sure, life on Tortuga Flats Farm will never be the same!
Posted by Brenda Whiteside at 6:00 AM