Months pass with short daylight hours. Everything is dormant and the garden is nothing but dirt. I thought about when the farming would all begin again and the time seemed so far away. Then...bam! There's no easing into it. We're way ahead of last year, but we'd only moved in and hardly knew where to begin. 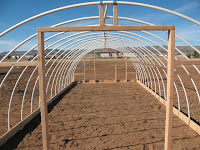 The greenhouse is nearly done. We're waiting for the plastic covering to arrive. I can't believe how fast Frank and Lance got the frame up - one day. It looked like the most difficult part was pounding the rebar into the ground to attach the PVC pipes.

Lance has trays and trays of seeds planted. They cover our dining room table and another table in front of the living room window. In a month, they go to the greenhouse. They'll spend time there until the danger of last frost has passed for most of them. Some vegetable seeds will be direct sowed into the ground but not for another month.

Meanwhile, the ground is getting tilled and compost added. We started a compost pile when we first moved in a year ago. Composting is not an entirely pleasant process but the garden is going to love it. The trellis system for the cucumbers is in the process also. We didn't do this last year so I'm excited to see how it will work.

I did manage to get all the blackberries trimmed and watered in between welcome spells of minding Sadi. Yes, twist my arm to hold my darling granddaughter! 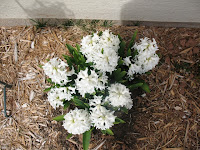 I cleaned out the front flower garden and planted some flower seeds. Last years perennials are already peeking through. The early ones even have flowers. What we aren't happy to see are the peach and apricot trees already sending out buds. I haven't even gotten into the orchard to trim and clean out the tree wells. Frank put the tree food spikes in and noticed the buds. Bad news. We lost them last year with a late frost. A frost in May is not unusual. I suspect peaches and apricots are not a good choice for the orchard on this prairie. Not sure why the previous owner planted them. They're two of my favorites but wonder if we'll ever get any since they are so early to bloom.

I have the trees to get in shape and the patio to clean up and then I'll get back to writing. Caring for Christie and Sadi comes first. Christie will be on her way to doing a lot more in another couple of weeks. I'll just keep the stories going in my head until I get it all down on paper.

We already have a rabbit problem this year. I'll leave that story for next time.

Posted by Brenda Whiteside at 6:30 AM