Hi there,
Thanks for inviting me to Discover Yourself. I’m glad to be here to talk about what I do to keep writing when my days are long and overwhelming – something that many writers face as they juggle writing and that “day job” Stephen King tells us not to quit!

When I attended Washington State University several years ago, I really wanted to find a critique group in Pullman, WA. I did and learned a great deal from the other writers who met once a week at the Skippers restaurant in nearby Moscow, ID. We traded our latest chapters. Then we were expected to read our work from the previous week aloud, getting not only written critiques but verbal ones as well.

The name of the group was Writer’s Bloc, and the expectation of regular submissions to critique along with the assignments due for my English and History courses since I was doing a “double major” meant there wasn’t time for me to opt out. I had to write every day either for class or for critique. As more experienced members told me, it’d be easier to listen to their advice if I brought in the “raw” or “rough drafts.” After all, I’d be revising and polishing that work anyway.

It was a smart choice and one I follow to this day more than twenty years later. However, instead of carrying in the hard copies fresh from my typewriter, I email my rough draft chapters to my critique partners and beta readers. Since I write mainstream western romance, I have one person who reads those. My other partner reads my teen novels and the kids at the family riding stable are my beta readers who get the rough drafts of my teen books too.

I’m constantly multi-tasking between all the different “hats” I wear. I work on the family farm, a 113 acre riding stable. I substitute teach in four different school districts – a lesson I learned while doing temporary office work – if I signed with one agency, I was dependent on what work they had available. By signing with four agencies, I worked every day. And now, I teach whenever I want during the school year.

However, that’s not all I do. When I’m home at the riding stable, I organize most of the riding programs, teach horsemanship around my day-job as a substitute teacher, nurse sick horses, hold for the shoer, train whoever needs it – four-legged and two-legged. And write books in my spare time, usually from 8PM to 2AM, seven days a week after a long day on the ranch.  When I can’t write, due to the overwhelming needs and pressures of the “real” world, words and stories fill my mind.  Even when I muck the barn, or drive my bulldozer, Frou-Frou, I think about books or short stories or pieces in progress and map out the writing in my mind.

While I have been writing for years, I am the first to admit it took a long time to learn my craft and more importantly find publishers who love my stories as much as I do. Thrill of thrills, Fire and Ice YA has brought out my Shamrock Stable series, horse stories that revolve around a riding stable – gee, sometimes I wonder where I get my ideas. No, I really don’t. What I loved about this book of a teenage girl who rescues an abused horse was that my publisher let me dedicate it to the two ‘real-life’ horses that inspired the novel. One was the horse that we actually rescued and my mom rode him for more than thirty years. The other was my Quarterhorse mare who passed away from cancer in the spring of 2011.

No Horse Wanted, an August release was the story of Robin Gibson who desperately wanted a restored 1968 Presidential blue Mustang for her 16th birthday. She has issues when her parents promise her a horse instead and she decides to bring home the worst one she can find.

An October release, No Time for Horses is about her best friend, Vicky Miller who must deal with her

parents’ divorce. Mom gets the house and a job. Her stepdad gets the new car and a girlfriend. Vicky gets to take care of her five younger half-siblings and that means she doesn’t have time to train her special project horse.

Deck The Stalls is my Christmas novella of what happens at the barn in December. Nothing But Horses will be out in March or April 2014 and I’m writing that now!
To find out more about Shamrock Stables visit, www.shannonkennedybooks.com   or http://www.fireandiceya.com
Either way, it was good to meet you!
Shannon Kennedy
Shannon Kennedy/Josie Malone Bio:
As a child, I loved to dream away the days in an old cherry tree on my family’s pony farm. In my imagination, the tree became a beautiful Arabian stallion, a medieval castle and even a pirate ship. On rainy days, I headed for my fort in the hayloft. While the rain thudded on the cedar shingled roof, I read books, eventually trading Carolyn Keene for Georgette Heyer. Today, I live on the family ranch in the Cascade foothills, taking care of 32 horses, 4 dogs and the cats. I’m teaching the kids and grandkids of the ones I taught way back when we started. I’ve had a lot of adventures over the years and I plan to write all about them.
Deck The Stalls Blurb 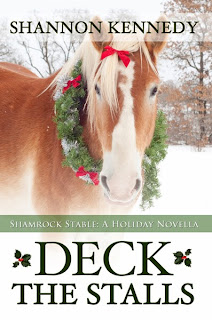 All Sierra McElroy wants for Christmas is a guarantee that the beloved horses that live at Shamrock Stable will be home for the holidays. Watering, feeding and mucking are part of her daily responsibilities and she’s good with that. However, when her mother decides they can’t keep every horse in the barn and should sell a few to some of their lesson students, Sierra definitely has issues. Family shouldn’t be for sale, especially when the would-be buyers won’t take care of her four-legged kin appropriately. She needs to come up with a plan to keep everyone home where they belong.  A stall- decorating contest may prove to be the answer until an unexpected snow storm shuts down the barn. Now, what can she do to save her friends and Christmas for her two-legged family too?
Posted by Brenda Whiteside at 3:00 AM