Rain and a Recipe for What Ails You 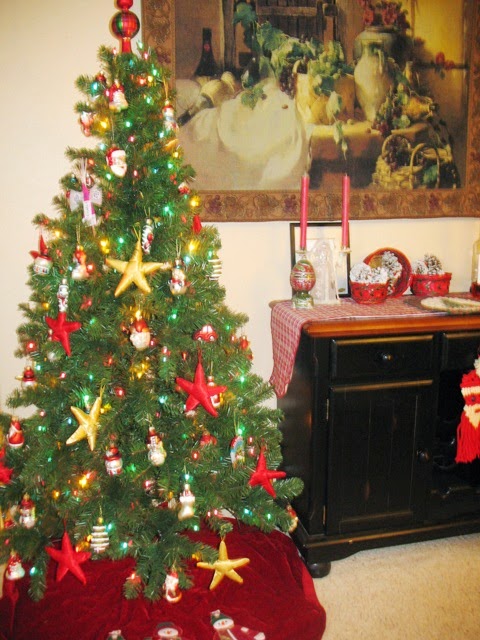 Last Tortuga Thursday I complained about November being a discouraging month. That'll teach me to whine. A bug hit me on the last day, and it's still hanging on. No sooner had I kicked the two day virus when a head cold settled on me and then morphed into a chest cold. A triple thriller to start off December. I don't care. This is my favorite month of the year, and I can't be bothered.

We're into our third day of rain here on Tortuga Flats Farm. It should move out tonight. We need a little rain every month for the garlic. If we get the rain, we won't need to irrigate with the drip system. Rain is so much better for crops.

Luckily, I felt good enough between the virus and the head cold to get the tree up. I even managed a few other decorations. We went simple this year with a smaller tree since Sadi is at the age she likes to redecorate the tree a few times each day. She is so much fun this year. When she saw the outside lights Pa Pa (grandpa) put up, her excitement overwhelmed her. She ran into his arms and gave him a gigantic hug.

I'll end with a recipe I shared on our Facebook page. When Frank and I lived in Germany, I fell in love with German sauerkraut which is nothing like the canned stuff you get in the states. It isn't really sour, more of a sweet-sour, and so flavorful. This recipe comes close to that flavor. I think the trick is the pressure cooker. Years ago, I had a pressure cooker. It was the old rocker kind that had to be monitored and timed. We just got this digital one and love it! It can also cook like a slow cooker and does rice too. Be warned, I am guessing at the amounts of herbs. I tend to just sprinkle it on without measuring.


Cabbage goes in bottom of cooker. Pour vinegar and water over it. Sprinkle all  herbs and salt. Add carrots. Place roast on top. Follow the directions for your cooker and cook for 40 minutes.

We had this last night and could be the reason I feel better today!
Posted by Brenda Whiteside at 8:58 AM