I’d never written a psychopath before, so found it was great fun to create the character of Viktor Garanin for my new book. Here’s a scene where readers can see how his wickedly twisted mind works:


It had been a frustrating morning for Viktor Garanin. He arrived promptly as the museum opened, only to be told that the man he needed to speak with, Mr. James Fisher, would be out of the building all morning for a talk at an historical society. He wasn’t expected in his office until 2:30 that afternoon.


Viktor did a good job of hiding his contempt for the secretary who imparted this information. With her public school accent and haughty manner, all that creamy pale skin and soft blonde hair, she was so condescendingly polite she reminded him of his mother. So terribly British. She represented everything he loathed about the English.


He’d left the museum in a tense state, fists clenched, wanting to strike out at something or someone. If he knew the town better, he would have looked for a boxing gym to get a bloody nose, or to give a few.


Instead, he attached himself to a tour headed behind Bath Abbey to the Roman baths, where the green, glowing water, laden with over 40 minerals you could taste—bah!—steamed up into the colonnaded terrace. This was topped with a collection of statues the Victorians had erected of Roman emperors mixed with British governors. Who else would they put up there but themselves? More than just hating British architecture, he hated the people, their looks, their customs and their bloody-minded assurance that they were superior beings. He hated his mother. 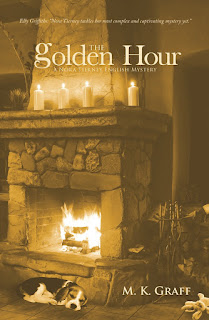 He’d followed the tour to Pulteney Bridge, the Palladian edifice executed in pale Bath stone often compared to Florence’s Ponte Vecchio as two of the world’s prettiest bridges. This one had a road running through its center. Along either side, shops sold tat of all kinds, strung out across its span. Hideous.


His contempt for the whole British nation surged, cementing his resolve to see his plan for their ruination through to its culmination, whatever the cost. What was one pitiful life of a dead art restorer compared to the greatness he would achieve with a national outbreak of smallpox that destroyed the entire British population? Then there would be no more weaklings, like his mother, who couldn’t take what his father had dished out.


At the back of his mind, a small voice whispered that if his succeeded in what he’d hoped, there was no guarantee the epidemic wouldn’t spread to his beloved Russia. Being an island had its advantages for quarantine and control. Viktor thought the world would rise up and make certain that no one from anywhere in the British Isles would be able to leave or travel anywhere. The thought of the resulting international upheaval satisfied him almost as much as the ensuing deaths. If he were extremely lucky, Ireland might be included in the ban, but he wouldn’t dwell on that. Only Vanya would have notice and time to get himself to Russia and join Viktor, back to his homeland.


Viktor lingered by the weir. The guide informed them that this had been built as part of a flood prevention scheme in the late 1960s. Viktor recognized the site from the most recent film version of Les Miserables, where Russell Crowe as Javert committed suicide. Viktor stared at the thundering water, and pictured himself holding James Fisher of the fancy Holburne Museum over the weir by his ankles, as the man screamed and bucked and pleaded for mercy. The daydream blossomed, and he felt satisfaction flood him when he let go and watched the idiot’s body falling, falling, falling into the rushing water.


You can find more of Viktor Garanin in Marni Graff’s newest Nora Tierney English Mystery, THE GOLDEN HOUR, set in England. The award-winning series features American writer Nora, living in England, with a nose for murder. Available in paperback, Kindle and Audible (http://amzn.to/2vabUMJ) and at Bridle Path Press: http:// bridlepathpress.com.