When I don't have a guest on Muse Monday, I'll share excerpts with photos that inspired scenes from my books. The scenes are most likely never before shared excerpts. I didn't have a photo for this scene today. It's all in my head. But the photos do play in to the setting where Phoebe goes to get away and relax. Unfortunately, murder follows her.

This never before shared scene gives the reader a kick-start as to what the story is about in Southwest of Love and Murder, second book in the Love and Murder series.

If you'd like to read the first chapter of this or any of my books, go here: FIRST CHAPTERS

Ripped from the pages... of Southwest of Love and Murder

Hazel followed her to the base of the stairs leading to the loft where Phoebe spent at least three hours every morning, writing and consuming a couple of caramel lattes. The loft above had become her second office, bright with more lace topped windows, and decorated with scenic photos of Arizona on the walls.

“Did you hear about the murder on the Arizona State campus last night?” Hazel’s gray eyes glittered. The owner took joy in providing her with inspiration for her mystery novels.

“Here.” Hazel snatched a newspaper off a side table. “Read this.”

“I’ll pull it up on the Internet. On campus, huh?” She paused with a foot on the first step. “Was the victim a student?”

“No, a professor.” The older woman slapped the paper against her leg. “I think his name was Carlyle.”

“Judas Priest.” A ripple coursed through Phoebe, and she gripped her coffee cup tighter. “Henry Carlyle?”

Phoebe read the brief article again, Henry’s face staring at her from beside the three-paragraph report on her computer screen. A cold chill raced down her spine. She took a gulp of the hot latte as if needing the caffeine boost to jar her from her mesmerized state.

The details were sketchy but close enough. He’d been found late at night by the janitor in his university office, strangled. No sign of forced entry—exactly as she had killed him in her first novel. The novel that gained her an agent and kick started a career. She owed her success to her low-down weasel of a husband who’d slept with every co-ed that would ever lift her skirt for the handsome professor. He’d even cheated on their wedding day. And so, she’d written the novel and killed him off—safer than committing the crime.

But someone had actually done it.

LINKS FOR SOUTHWEST OF LOVE AND MURDER: 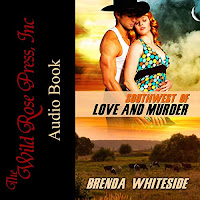 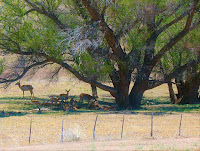 Email ThisBlogThis!Share to TwitterShare to FacebookShare to Pinterest
Labels: Discover..., inspiration, Love and Murder Series, Ripped from the pages, Southwest of Love and Murder