Thank you for letting me Muse on Monday. Over the years, I’ve worn many hats. From the logical side of my brain came the skills for technical writer, computer programmer, and systems analyst. In contrast is my experience as museum director and historian. And of course, author.

One of the most interesting items in some historical collections are the diaries. These hand-penned missives capture a specific point in time in one person’s perspective. The data captured can be as simple as the amount of money spent on groceries that day, discussions held at a civic group’s meeting or who gathered for dinner and what they ate. In his diary, Charles Wardell of Matawan, a small town in Monmouth County, New Jersey, recorded the 1884 earthquake. Inspired by the diaries I read while in the museum field, I incorporated the concept into my latest release. 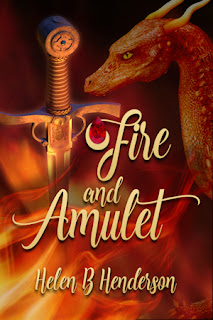 Deneas is a slayer as was her mother, and her mother’s mother. In Fire and Amulet, the slayers keep a journal of lands explored, people met, and trades made. However, not all of their entries were meant for public viewing. To keep her thoughts and experiences private, Deneas’ mother used a double encryption to ensure the information did not fall into the wrong hands. Not only did she write her entries in a personal code, but used a language that no one in in the village knew except her friend Trelleir. As an added level of privacy, she hid her journal amidst the reeds of the thatched roof of the home she built.

When commanded to leave her home village and slay a mythical dragon, Deneas decided to use her mother’s journal as a guide. To see the results of Deneas quest, you’ll have to read Fire and Amulet.

Blurb:  Trelleir is a true dragon whose magic allows him to take on human form. The last of his kind, he longs for companionship. However, his only friend is not only a human female, but a slayer. Sworn to kill all dragons, including him.

Summoned by the village council, Deneas is sent on a quest to kill any and all dragons, and cannot return without proof of her success. Finding the mythical creature and avoiding its deadly talons and fire are not her only problems. Another slayer follows with orders to kill her. As she retraces her slain mother's footsteps, she learns the world is not what it seems.

The pull of someone seeking him tore Trelleir from his somber reflections. Only one person could be the source of the summoning, Deneas. He had protected her since her birth when the non-verbal thoughts of the babe registered as little more than faint cries. Now that she had reached adulthood the mental connection between them increased to the point where he swore he could hear her thoughts.

He pictured her in his mind’s eye, sitting on the rock wall he and Adais had built as a border around her private garden. Deneas’ face was turned towards the heavens. He knew she searched for a dragon. The urge to leap into the darkness, to fly to her, tore at his control.

“Go to her,” whispered the wind. 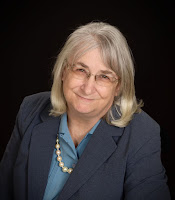 About Helen Henderson:  Although the author of several local histories, and numerous articles on the topics of American and military history, antiques and collectibles, Henderson’s first love is fiction. Her work in the museum and history fields enables a special insight into creating fantasy worlds. The descendent of a coal-miner's daughter and an aviation flight engineer, her writing reflects the contrasts of her heritage as well as that of her Gemini sign. Her stories cross genres from historical westerns to science fiction and fantasy. In the world of romantic fantasy, she is the author of the Dragshi Chronicles and The Windmaster Novels. Stand-alone novels include the dragon magic fantasy, Fire and Amulet, and the dark fantasy, Imprisoned in Stone. In her books, she invites you to join her on travels through the stars, or among fantasy worlds of the imagination.