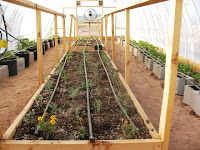 The veggies that got their start in trays in the greenhouse are all in the ground. Now the greenhouse is being utilized to grow herbs.
Lance has a few veggies in there also to see how they do in a more controlled environment.

The sun is pretty brutal here so he added a shade cloth over the greenhouse to help keep the temperature down. Fans blow at both ends in addition to the attached exhaust fans.

A gigantic dust devil
was headed right at us. Lance called me outside in time to see it pick up various debris from two houses over including a couple of large pieces of sheet metal. I ran for my camera, but by the time I had it open and ready to shoot the cyclone hit our neighbor's property and dropped the huge pieces of metal in their backyard. All I was able to snap was the underside of it as it disappeared into the sky.

A few blossoms and tons of buds are appearing on the blackberry bushes. With a lot of help, I got them all weeded and mulched. I used grass clippings this year as mulch. I didn't mulch at all last year so the hope is that the mulch keeps the weeds from coming back too strong. Weeding thorny blackberry bushes is painful.

The potatoes have sprouted. Getting antsy about the sweet potatoes. We had
to order them on line and thought they'd be here by now. A phone call to a very dull sounding fellow told me they'd be shipped this week.

The youngest member of the household, my gorgeous granddaughter, continues to grow and amaze. She's so alert and insists on being held in a sitting position most of the time.

The oldest four-legged creature in the house is now on pain meds. Rusty has joint problems and has been so miserable. He has trouble keeping up with his two younger companions with all his aches and pains. We made the decision to put him on meds and he's a happier old man.

Wild grass that looks like bermuda is our biggest problem so far in the veggie fields. The roots go so deep that pulling it all up isn't possible. Not sure what the solution will be. Organic farming presents its problems.

Posted by Brenda Whiteside at 6:30 AM