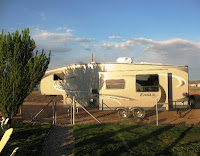 We bought an RV, a fifth wheel. After all kinds of should we, shouldn't we, what are we doing, how can we not - we decided if not, then when? If not now, then never.

The decision did not come easy but makes sense for so many reasons. First a little history. Many years ago, Frank and I decided we would retire doing the RV thing. We've been shopping RV's for over fifteen years. We wanted a fifth wheel. Then one year, after some financial mishaps, our plan changed a bit. Or at least Frank tried to talk me into changing it. If we were going to be RVers, we'd have to sell it all and actually live in the RV. My resolve faltered. I wanted a home base. We kept shopping, and he about had me convinced when the economy really took a nosedive. The RV dream died with like dreams of many people our age.

Bring us up to 2012, when our two families joined together to farm. The original idea had been for us to actually get an RV and only help on the farm if we felt so inclined. It seemed possible if we were sharing expenses. But that was easier said than accomplished without much in the bank (except love). So, we hunkered down under one big roof and carved Tortuga Flats Farm out of the dusty prairie. And it's been rewarding as well as an adventure.

Fast forward to 2013. The other family is growing - I might have mentioned once or twice I have a beautiful baby granddaughter. The crops are more organized and this experiment is a minor success. The idea of creating more space started as a dim flicker in my mind and I let it grow. We looked at adding on to the house or building a guest house. Neither turned out to be financially feasible - close but too scary to take on. Then the old RV idea surfaced. It certainly adds space to the living area and it just happens to be mobile. Frank and I are gypsies
at heart. We found what we wanted, they were having a sale, the payment was unbelievably low, we bit our nails, and bought it. Since we will be able to travel more, not be home quite as much, we're trading ends of the house with Lance and Christie. They will have the large end now. This seems fair since there are five of them (counting dogs) and three of us.

Only one minor glitch - we don't have a truck to pull it. We may have been able to maneuver buying a new fifth wheel, but we'll have to go used on the truck. We're shopping and have a car salesman friend on the look out. You might think we put the cart before the horse, but I'm okay with that. We'll get there. I'm just anxious to take our first voyage. 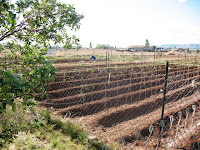 Meanwhile, the potatoes are in the ground as are the peppers, tomatoes and onions. All seeds are planted for various other vegetables. I've seen a few buds on the blackberries. And Frank's declaration a few days ago that we will have no fruit on the trees this year may have been an early prediction. Apparently, a few apple blossoms are just now opening. No peaches, pears, plums or figs. Keeping our hopes up for a few apples. Looking forward to our first RV trip.
Posted by Brenda Whiteside at 6:30 AM