From Simple Paraprofessional to Paranormal Romance Writer by Tamela Miles

I always imagined a perfect life for myself in 2011– working as a school paraprofessional classroom aide as I worked hard to complete my Bachelor of Science degree in Child Development at the cozy Cal State University campus in my little haven of South Bay, CA.  I had it perfectly planned, with structured time for work, classes, and my writing.

My first trip into paranormal romance writing began many years before, in the late 90s in my beloved hometown Altadena, with a dreary little piece entitled “The Mirror”. The 90s were largely about Generation X angst (just give almost any 90s song a good listen!)  and I was angsty enough to craft this short story that was a downer from beginning to end. My friends loved it and I cherished those worn printed pages of my story in a binder. Life happened, as it eventually does to all of us, and I set aside writing for awhile.

Fast forward back to 2011. When I wasn’t busy, I was voraciously reading paranormal romance stories and asking myself, “Why aren’t you sharing all these great ideas you have?” Inspiration struck to try the self-published route and I got busy very quickly, crafting my own stories. I decided that “The Mirror” needed me to breathe new life into it and I overhauled it. It became “Thea’s Mirror”, which I included in my horror/paranormal romance compilation, “Rock, Paper, Scissors”, which was published in 2015 by Broken Publications. Readers tell me all the time how much they love that little gem from my past and it makes me emotional every time. I realized that I had so many more stories to tell, so I got to work over the summer of 2015 and crafted a short series, entitled the Hell On Heels series. The first story is “Heart of a Hunter”, which I submitted to The Wild Rose Press. I was a ball of nerves during the time between submission and acceptance by TWRP. My hands were shaking when I got the news. “Heart of a Hunter” was just released in early April 2016 and the positive feedback I’ve been receiving from readers is glowing! I’m working with my editor at TWRP on #2 in the series, entitled “Dark Deliverance”, which continues Elle’s story. 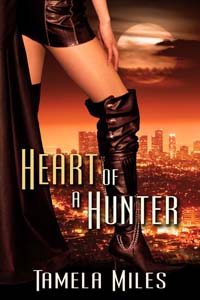 “Heart of a Hunter” shares the story of a teen, Elle Connor, who’s more paranormal than normal. She discovers that the war between guardian angels and demons is real and is herself called to follow in a long line of demon hunters. She must make difficult life choices about love and friendship. Ultimately, it’s a lonely road for her. She does, however, know how to hunt in style – black stiletto boots and all.

So, now I have my (kind of!) perfect life. I’m currently an Ed.S Masters Degree student, studying School Psychology at another Cal State University campus in the Inland Empire, CA. My writing is definitely not in the backseat of my life anymore – it’s front and center. Writing, for me, is like taking a deep breath and jumping into another world of endless possibilities – very much the air that I breathe.

Buy Link for Heart of a Hunter
Author Bio:
Tamela Miles is a California State University San Bernardino graduate student with a Bachelor of Science degree in Child Development and a former flight attendant. She grew up in Altadena, California in that tumultuous time known as the 1980s. She now resides with her family in the Inland Empire, CA. She's a horror/paranormal romance writer mainly because it feels so good having her characters do bad things and, later, pondering what makes them so bad and why they can never seem to change their wicked ways.

She enjoy emails from people who like her work. In fact, she loves emails. She can be contacted at tamelamiles@yahoo.com or her Facebook page, Tamela Miles Books. She also welcomes reader reviews and enjoys the feedback from people who love to read as much as she does.

Ms. Miles has a current short novella 3 story series on her writing plate with The Wild Rose Press, entitled the Hell On Heels Series. #1 of the series, entitled "Heart of a Hunter", is now available. #2 of the series, "Dark Deliverance" is coming late 2016. For those who are excited about it (yippee!), please feel free to check out the author's soundtrack playlist for Hell On Heels on YouTube.com, listed as Hell On Heels: Songs from the Edge by Tamela Miles.
Posted by Brenda Whiteside at 5:00 AM

Email ThisBlogThis!Share to TwitterShare to FacebookShare to Pinterest
Labels: Discover Yourself, Heart of a Hunter, Muse Monday, Tamela Miles