It's a wickedly amusing day on Wicked Wednesday with Peggy Jaeger. Enjoy!

Growing up I had a very strict, stern, and sometimes even mean, Irish grandmother. She was my mother’s mom and there were decades of family drama behind both of them that filtered down to me. Suffice it to say I never did anything right in her eyes and I was destined for a life of failure if she was to give her opinion.

Yeah…like I said. She could be mean.

When I decided to write my bridal series, I knew I wanted to add an elderly Irish grandmother into the family mix, but I was going to write her the way I would have wanted my own grandmother to be. Funny, outrageous, loving, and above all, supportive of her grandchildren and their choices in life.

Fiona Bridget Mary Darcy Sullivan O’Dowd Heaven Scallopini better known as ninety-three year old Nanny Fee, has the height and exuberance of a leprechaun and the same lilt in her voice she was born with despite having left Ireland at the age of four.  She is a fiercely independent, self-educated woman with four ex-husbands she’s buried and mourned, and an only son who doesn’t know how to handle her.

Nanny Fee has a wicked, biting, and witty sense of humor, is an outrageous flirt and can make grown men blush when she bats her eyes at them.

In this scene from Today, Tomorrow, Always, she’s just met writer Mac Frayne, a man not known for smiling or an outgoing personality. Once Nanny gets hold of him, though, things change for the better.

Excerpt:
I settled Nanny into the reclining chair she’d been able to bring from home and indicated the other chair in the room for Frayne, while I sat on the edge of her turned-down bed.I let Frayne take the lead in the questioning.“I’m doing research on the Reverend at the museum, and I noticed something odd when I began tracing the descendants’ files. There’s nothing I can find catalogued in the archives about Robert Heaven from after his college graduation until his marriage and then his death,” Frayne told her. “I find it odd nothing of note was ever saved by someone about him, when every other family member has literally reams of documents and files associated with them.”
“Does seem odd, aye?” Nanny said. “Robert had a very full life before we married. Attended college. Yale. Ran his own company for a number of years. Stayed a bachelor until his late fifties, married to his company, most who knew him said. Then we met, and as the kids say these days, the rest is history.”
Frayne’s smile was soft and, I had to admit, charming.
“Together almost twenty years before he went to his maker with a smile on his lips and a full stomach, seeing as we’d just dined at the annual Jingle Bell Ball. Good years. Good times.”
“You don’t happen to still have any of his possessions or personal items, do you? Or anything from his family archives? I realize he’s been gone for some time, but if you know of anything, or anywhere I can go to find something, anything, to help in my research, I’d be in your debt.”
The twinkle in Nanny’s eyes brightened. “Well, now, darlin’ boy, it’s more careful you should be sayin’ those words to the likes of me. We Irish take the grantin’ of favors and the payin’ up o’ debts very seriously, you know.”
Frayne must have recognized the devilish gleam in her gaze. My grandmother was many things, with flirt holding the number one position, harmless imp the second. And as a word of caution—never play poker with her.
His mouth split into a grin rivaling Nanny’s. “I’m sure you’ll be able to come up with the perfect recompense, Mrs. Scallopini. Like the dish, minus the veal.”
Her girlish laughter warmed my heart. “Ach, you’re a darlin’ man, you are. The charm of the devil himself. I don’t know anything specific about any documents or whatnot Robert may have had, but the man was a pack rat, a real hoarder if truth be told. And the messiest human being I’d ever met. Never put anything away once he’d taken it from wherever it was stored. A real chairdrobe and floordrobe, was he.”
“Excuse me, what?” Frayne’s gaze swung from Nanny to me.
Since I have a black belt in Nanny-isms, I translated. “Chairdrobe is what Nanny calls someone who piles their clothes on a chair instead of putting them away in a drawer or hanging them in the closet.”
“Me dear departed granddaughter Eileen was a horrible offender as a teenager,” Nanny said.
“So, going with the description”—Frayne cocked his head at me—“a floordrobe is...”
“Someone who tosses clothes and belongings on the floor in the same fashion.”
Nanny sipped her tea. “Horrible habits, both. ’Twas the cause of many an argument between us. O’ course, the makin’ up was worth the yelling.”

Honestly, if I’d had Nanny Fee for a grandmother, who knows how differently I would have turned out! Hee Hee. 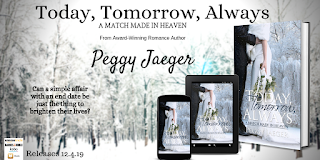 Author Bio/Social Media Links:
Peggy Jaeger is a contemporary romance writer who writes Romantic Comedies about strong women, the families who support them, and the men who can’t live without them. If she can make you cry on one page and bring you out of tears rolling with laughter the next, she’s done her job as a writer!