We All Love a Little Wicked by Barb Caffrey #WickedWednesday #Elf

Please welcome Barb Caffrey to Wicked Wednesday because we all love a little wicked.

The thing is, we don't necessarily like to admit to it. Not when we're out paying bills, or being responsible, or making sure the kids in our lives get their teeth brushed.

When my late husband and I worked on the Elfy duology together (at that time one book; now, it's AN ELFY ON THE LOOSE and A LITTLE ELFY IN BIG TROUBLE), we knew that everyone loved a villain. But we weren't sure at first what to do in order to get that villain across.

Enter Dennis the Dark Elf Priest. (Soon shortened to Dennis, the Dark Elf, as writing "Dark Elf Priest" all the time became too much for us to bear.) Dennis was a nasty cuss who hated anyone who wasn't a Dark Elf, but was masquerading as a human priest in order to stir up as much trouble as he could. (If you're thinking, "That Dennis really is a menace," you're right. I even said so at one point in the book!) He planned on sacrificing at least one Elfy (a race of short magicians, none above four feet two inches tall) at Beltaine, otherwise known as May Day, because he wanted power. And he didn't care about any repercussions – for example, the fact that most humans know nothing about magic, and would be upset to find out about it, after he'd killed someone in cold blood in front of them at a major church festival, didn't even enter his mind.

Our hero, Bruno the Elfy, is in love with Sarah, a mostly human teenager. He is good all through, but as a teen himself, he doesn't particularly realize it.

I'm sure you can tell where this is going, but I'll spell it out: in A LITTLE ELFY IN BIG TROUBLE, Dennis's aim is to capture Sarah. Because she has power, and is partly of the Elfy race. And if he sacrifices her, he'll gain more for himself.

But in the interim, he's got another Elfy to sacrifice. And that person is Bruno's teacher Roberto the Wise. The only other person Bruno cares deeply about…and the person who took Bruno's place at the sacrificial table by way of a ruse.

First, here's a blurb for you telling you what A LITTLE ELFY IN BIG TROUBLE is about: 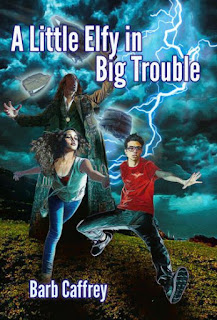 Bruno the Elfy has lived through much since he was sent to Northern California. And while he's freed himself from enslavement, his Elfy mentor has been taken by an evil Dark Elf—and his mostly-human fiancée, Sarah, is also at risk.

Can young love, desperation, and great unexpected power win out despite it all?

I hope this will whet your interest! But in case you want more right now, how about an excerpt? (Dennis has to be wicked enough for any three others, so hopefully he's a good choice for Wicked Wednesday!)

## Excerpt follows ##
"Now is the day of reckoning," Dennis said briskly, rubbing his hands over the top of the sacrificial table. It looked to be rough-hewn marble. An auric stench permeated it, which made Bruno wonder just what—or who—Dennis had sacrificed recently. Bruno offered up a prayer for the unknown innocent's soul just in case.

"What day of reckoning, Dark Elf?" Sarah retorted. "All I see is you, my father—Daddy, how could you do this?—and some of your buddies causing trouble."

"The Elfy presence on Earth will be eradicated," Dennis growled. "Starting with this—" he pointed to Roberto "—then we'll get to you. And maybe we'll even kill your mother. How's that for 'what day of reckoning?'" he finished silkily.

"You'll never get away with this," Sarah said, tears coursing down her cheeks.

"Not only will I get away with it," Dennis corrected her, "I have some of my people out searching for your Elfy boyfriend. When we get him, our work will be complete."

"You'll never find him," Sarah said. "And Daddy, I hate you! I repudiate you!"

Thomas turned away from Sarah with a smug, self-satisfied smile on his face. Bruno had never hated anyone more than he hated Thomas in that instant. That hatred kept him from thinking much about Dennis's statement, which was probably just as well.

He was already scared enough as it was.

Email ThisBlogThis!Share to TwitterShare to FacebookShare to Pinterest
Labels: A Little Elfy in Big Trouble, An Elfy on the Loose, Barb Caffrey, Discover..., Fantasy, Wicked Wednesday