Let me introduce you to today's guest blogger. Rosemary Gemmell is from Scotland, which I'd love to explore some day. So, let's let Rosemary take us there.

Thank you so much for featuring me on your blog, Brenda – it’s lovely to visit with you! Since I’ve always lived in Scotland, I’d like to mention a couple of the real places I used for the setting of my latest novel, Highcrag, although the house itself is in a fictional location in the east coast of Scotland.

I love to explore historical sites and buildings with my long-suffering husband. Fortunately, we both enjoy walking and there’s always coffee and cake at some point. Having grown up in the beautiful west coast of Scotland, where a couple of my other books are set, it was quite a change when we moved to a more central/east location to be nearer family.

However, it’s been great fun visiting new venues and using some of the locations in my writing, both in novels and in my non-fiction articles for The Highlander magazine in the US. One of my favourite places is Culross in Fife, a perfect example of a 16th century village which is so authentic that it was one of the locations used in Outlander.

The ‘Palace’, which is more of a Merchant’s House, dates from the same period and really is the lovely ochre colour in the photo. The streets are cobbled and one of the hills is quite steep, though it’s worth the walk to visit the old ruins. The Town Building is significant in my novel when heroine, Cate, is trying to find out more about her ancestress who was burned as a witch in the 16th century.

Another favourite location is the beautiful little village of Aberdour, in the opposite direction of Fife. We go here a lot for the coastal walks and great coffee and cake (or fish lunch) at the little 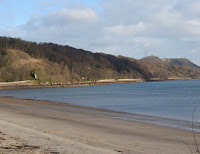 café/restaurant overlooking the beach. It was the perfect place to bring my heroine and hero for the day, to get away from the dark atmosphere at Highcrag.

As I’m sure most readers know, Scotland has an amazing history and such beautiful scenery, from the Borders in the south right up to the Highlands. But it also had one of the worst witch hunts ever in the past, with thousands of women accused and killed, most without genuine cause. This research gave me the biggest incentive to write Highcrag while providing a modern Gothic Romantic Suspense novel.

Blurb
When Cate Stewart’s life falls apart, a job cataloguing the vast library at Highcrag on the Scottish east coast sounds perfect. Especially since she has a personal interest in the notorious Scottish witch hunts of the sixteenth and seventeenth century.

But the house has a dark past that seems to affect the present. And an owner, Lyall Kinnaird, who unexpectedly stirs Cate’s damaged heart.

As the Celtic festival of Samhain approaches, when the veil between the living and dead is thinnest, who can Cate trust? 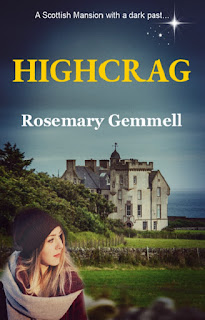 Excerpt
A weak sun peeked between the drifting dirty white clouds, the light wind blowing away all dark thoughts. Striding across the nearest empty field, Cate lifted her face to the sky and embraced the day in this remote pocket of the east coast. She let the disturbing images from the old books fade away and hummed a rhyme to herself as she reduced her speed to wander and absorb the sight of the wide, empty North Sea.

A little further on, she stopped in her tracks.

“The horseman,” she murmured, catching sight of man and beast staring out to sea. Was he real? Curiosity winning out, she strolled on until she was within shouting distance.

Before she decided what to do next, the rider turned his head and saw her.

She gasped when she saw the dark hair and arresting features of the man in the portrait.

But no, as soon as he trotted nearer to her, she saw she was mistaken. The similarity was undeniable but this man was not only real, his mouth lacked the arrogant set of the eighteenth-century subject, while his hair had the merest hint of grey here and there.

Averting her eyes from his wide, sensuous mouth and firm lips, she almost missed the twist of a smile as he looked down on her. Although undoubtedly a modern-day man, her heart reacted at once, as though the portrait had come to life.

Highcrag is available in e-book or print from Amazon, or you can order the paperback from bookshops or through libraries.

Author Bio
Rosemary Gemmell is a published Scottish novelist of contemporary and historical fiction, and a freelance writer whose short stories, articles and occasional poems have been published in UK magazines, the US, and online. She is a member of the Society of Authors, Romantic Novelists’ Association and Scottish Association of Writers. Scotland greatly inspires some of her stories and she loves to dance!