Dear Diary is a serialized account of one girl's teen years in the 1960s. Although based on my own diaries, the story is fiction. The angst, family drama, and joy are real enough for teenagers in any era. This is an experiment for me. I'm sharing with you the rough, first draft, the skeleton, of what could become a novel. 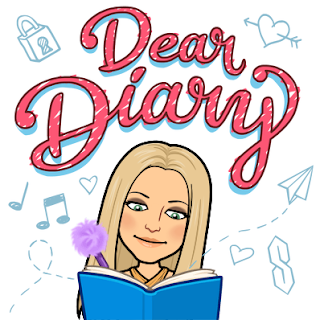 Dear Diary, Not much happened today. Hung around the house. Watched some TV. I had a wonderful Christmas. My main gift was a transistor tape recorder! Mum (I decided to call her that now. I think it sounds cool. So English like the Beatles) was sick most of the day. They came home stoned last night. I heard Daddy stumble into a door, and Mum say, “You’ll never drink rum again.” Then he said something about wine. Daddy didn’t look too bad this morning. I’m guessing Mum should never drink wine again. New Year’s Eve is always a big deal to them. This year, Mum’s dress was a white, sheath, with rhinestones and beads in swirls down the front. She looked sexy. Daddy patted her butt as they went out the door. The party this year was at Aunt Velda’s house. Of course, I was stuck babysitting Sandy and Davie. Sandy doesn’t really need babysitting. She babysits for neighbors sometimes but never real late like tonight. I wanted Denise to come here and spend the night, but Aunt Velda thought we’d get into trouble or something. She’s so strict. It’s no wonder Denise sneaks out when she can. Mum wouldn’t push the issue. I spent most of the night on the phone.

Dear Diary, school’s in again. Seems so silly to go back for two days. I nearly flipped out right after lunch. I walked with Donna down the hall to her next class. Larry Lowdon is always there too. He’s a senior and is so hot. She knows he turns me on. He lives next door to her so she sees him all of the time. Well, she just had to stop and ask him if he wanted a French fry. I stood dumbfounded. I hope I wasn’t drooling. He must be six feet tall, wavy blond hair, and the warmest blue eyes. I just have to get to know him. Another turn on—Gary Sanders—said hello to me twice today! He’s a sophomore. All I could do was say hi. Why do I freeze up like that?

Dear Diary, school went as usual. Had an Art Club meeting right after school. I joined before Christmas. I also joined Pep Club. I think I need to be active in on-campus activities. It’ll look good in my records. Went to the football game with Donna and Janice. We played Flagstaff on our field. We almost won. Larry L. was just too much. We waited afterwards so I could see him walk out of the dressing room. But as my luck goes, he went the opposite way home and walked. We rushed over to Donna’s house to catch a glimpse. Got there just as he went in his house. At least I saw him. He’s wild. I’m crazy. O-o-o-o Fate just has to work my way. I guess Gary Sanders likes Darlene Davis. That’s the general assumption. I’ve seen them talking in the halls. I can’t say she isn’t pretty. Her blonde hair is real, but she has this attitude about her. Like she knows something the rest of us don’t. It’s kind of intimidating. Sure hope this weekend is fun. Corrine is having a party, but I don’t really know anyone she’s inviting that I’m dying to see. Her older brothers will probably invite some people too. I don’t much like them. Flash is nasty mouthed and Ed likes to tease me. Flash dropped out of school last year. Ed is a year past high school but still living at home. At least I don’t have much homework this weekend.

Dear Diary, Wow! How could I have thought this night wouldn’t turn out fun. Corrine had her party at 7:30 to midnight. I never had so much fun. He’s is too much. His name is Mel Allen, junior, 17, cute as they come. Goes to P.U. I thought I was lost when I told him how old I am but not so. If only, I hope, he asks Corrine about me. I must see him again. He’s an absolute nut. He had us all in stitches. He’s too much. I’ll simply die if I never see him again! I’m so sleepy I can’t write anymore but oh wow!

Oh, Dear Diary, I called over at Corrine’s today, and Mel was there with Ron helping clean up. My heart started pounding when I heard. She told him I was on the phone, and he wanted to talk to me. Man! He is really tough. He asked me what I was doing next Friday night. I hope I didn’t sound all girlie excited. He said that Corrine’s mom and dad, Corrine, Ron, Donna, Evan (Donna’s new boyfriend), Mel and I could go to Riverside! I didn’t know underage could even get in there. I know Mum and Dad have gone there to listen to country music and dance. I guess since Corrine’s parents would be with us, we could get in. I’m working on it. I sure hope my parents consent. I’m just ape over Mel. One of Donna’s friends called me. His name is Gary Tripp. He sounds nice.

Dear Diary, tragedy. I talked to Mel tonight. He went over to Corrine’s and wanted me to meet him there, but I couldn’t go on such short notice. Plus, I’d already had the big row with the parents. I wasn’t even talking to them and to ask them if they’d take me over to Corrine’s for an hour would’ve just been impossible. He said some of the sweetest and nuttiest things. But like I said, tragedy. Young, young, young! Donna and I can’t go to the Riverside Friday night. I’m not on good terms with my parents. How could they? I am not that young! But they don’t trust Corrine’s parents. Oh, Mel! If he doesn’t call or come over tomorrow, I’ll know it’s all over. I’ll die, die. I’m mad over him. Gary T called too. He’s such a nut. What a crap ending to my day. I totally struggled with the science test. Ms. Chute loaded on the English homework. And now this.

Dear Diary. The day was a drag man drag! I was so depressed. I had no pep for the pep club so I didn’t stay for the meeting. But I’m on better terms with the parents. Really what good does it do to linger on bad feelings? They really are super most of the time. Plus, Corrine came up with an idea. Corrine spent the night with me. Ron, Evan, and Mel came over for about an hour. Donna couldn’t make it. He’s still so cute and nutty. I flipped. Since we can’t go out Friday to the Riverside, Corrine’s going to have a very small get together at her house. I can’t wait till then. Gary called while Mel was here. Mel asked me who that Gary guy is. Whoa man! He wasn’t joking either. I sure like him.