Wicked Wednesday with a Trio of Wicked Heroes by Kryssie Fortune

Hey, readers, join me in welcoming Kryssie Fortune to Discover... and Wicked Wednesday. This is one triple wicked post for you. Read on and enjoy. 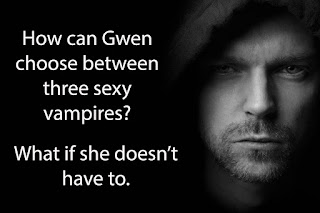 Hi. I’m Kryssie Fortune. Thanks, Brenda, for letting me share not one, not two, but three wickedly attractive males with you. My poor heroine can’t choose between them. Then again, she doesn’t have to.

Gwen’s a fertile human in a post-apocalyptic world. Vampires, werewolves, and demons have become the dominant species. Thrown in a dungeon full of blood-hungry vampires, she won’t last long. Fortunately, three sexy saviors are at hand.

Gore’s seven-feet tall, with a shaved head, and more muscles than most people dream of. As a child, his family rejected him for his throwback Berserker heritage. Naturally protective, he hates injustice.

His fighting skills are legendary. He prefers hands on violence to using weapons. He calls fencing fighting for girls. A loner, he only shows his gentle side to the other members of his triad—Bronte and Plato.

The three of them have formed a vampire triad. Their bond makes them closer than brothers. He doesn’t believe he deserves a soulmate. Now he’s saved Gwen from ravenous vampires, he sees her as a vulnerability.

Standing well over six feet, Plato’s the smallest member of the triad. Lean but muscular, he uses his brain more than his brawn. His shoulder-length blond hair and charming smile win women’s hearts. Quick-witted, he wins most arguments. He’d the first to admit it if he’s wrong, though.

During his long imprisonment, he’s studied vampire law with the elders. He has a knack of finding things. That includes both facts and small luxuries to make the other prisoners’ lives better. In public, he defers to Bronte. Behind bedroom doors, the dynamic changes.

If he could, he’d give Gwen the world. Instead, he’ll kill her rather than let the dungeon’s conditions drag out her death.

Bronte masks his generous nature with a careless facade. Chosen by a mysterious birthright, he’s the rightful vampire king. It gave him the ability to mesmerize. He hates forcing his will on others, though. A skilled warrior, he’s ruthless when he needs to be. He’d rather turn his enemies into friends, and he’s kind whenever possible.

With his dark curls and piercing golden eyes, his looks make women flock to him. He’s first to recognize Gwen as theirs. Aware humans can’t survive in this dungeon, they force a mating bond on her. It strengthens them enough to escape.

After seven years without a king, the vampire clans announced a tournament to find their next king. Either Bronte wins it, or he’ll die trying. 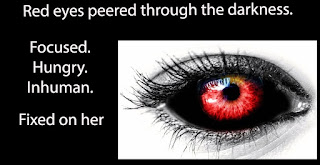 When she is captured and thrown into a cage filled with ravenous vampires, Gwen assumes she will be devoured. But among the horde is a huge, terrifyingly powerful berserker who has other plans for her. She will belong not only to him, but to all of the vampires of his triad, and her beautiful body will be theirs to use and enjoy as thoroughly and shamefully as they please.

Gwen soon learns that her new masters will demand obedience from their little human, and it isn’t long before her defiance has earned her a painful, humiliating spanking. But even with tears still running down her blushing cheeks, her helpless arousal cannot be denied, and as she is claimed and ravaged again and again her pleas for mercy are soon lost amid her cries of pleasure.

Publisher’s Note: Claimed as Theirs is a stand-alone novel set in the same world as Taken as Theirs. It includes spankings and rough, intense sexual scenes. If such material offends you, please don’t buy this book. 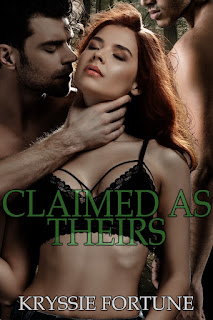