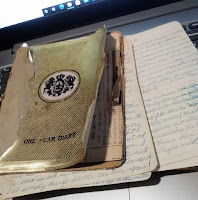 Dear Diary is a serialized account of one girl's teen years in the 1960s. Although based on my own diaries, the story is fiction. The angst, family drama, and joy are real enough for teenagers in any era. This is an experiment for me. I'm sharing with you the rough, first draft, the skeleton, of what could become a novel. If you  missed any episodes, go to the Index in the right column and click on “Dear Diary” for past posts. 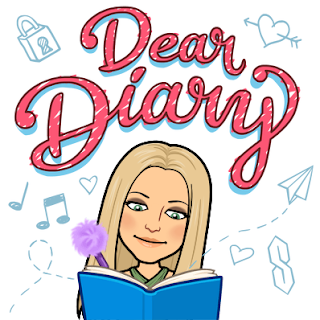 Dear Diary, school today as you know, and I was upset by the end of the day. I got my first B grade on a history test. I’ve had straight A’s. How did this happen? Daddy told me not to worry and to tell my teacher I was too busy making history to study history. He can be such a nut. Then tonight started as a tragedy. First Mum and Donna’s mom said we couldn’t go to the get together at Corrine’s on Friday because her mom and dad left last time we went to a party there. Mum said I could have it at my house to 11:00. But I wouldn’t settle for that. I wanted midnight, so I told her to forget it. I was the one that insisted parents were impossible, and we went round and round about it. Finally, Mum compromised, and we settled for between 11 and 12. I called Corrine. Mel was there and Ron too. She kept saying no, she wanted to have it at her house, so I came right out and told her why. Then Mel got on the phone, and he agreed with me. I got mad at Corrine. She was being so stubborn. After much confusion, we at least decided that we would first go to the game. I think everyone will come here after, but like I said—lots of confusion. I still adore Mel. He likes me too.

Dear Diary, I wasn’t feeling well this morning so I stayed home. When Dad came home from work, he made me come to my senses. I realized I’ve been crawling for everyone. I couldn’t stand up for myself, so I had a blow up with Corrine. She can be so stubborn. Mel called. He wanted to go to Encanto instead of my place on Friday. I got disgusted. I told him my place or no place and the truth about why I couldn’t go to Corrine’s. Really read him off, but nicely. After jabbering at him, he was silent a second then said, “I’m proud of you.” I felt so good. I was afraid he wouldn’t understand, but he’s so sweet. He even said, “anything you say beautiful.” Corrine called because Mel called her. She was like all jolly and agreeable. We’re coming to my house before and after the game for eats. Yeah! My dad can give the best advice. He tells funny jokes too.

Dear Diary, school flew by until last period English. I was so looking forward to tonight. Ms. Beck caught me daydreaming and asked me a question which I blew. I usually like her, but that was mean. The three couples went to the game together (me and Mel, Donna and Evan, and Corrine and Jerry Parsons…Ron stood her up, the dork). Mum let me go in the car with Mel! Donna and Evan were with us. Flash drove Jerry and Corrine to the game and then to my house afterwards. We played at St. Mary’s (80 to 34 our win!). Then everyone came to my house until midnight. We listened to music, danced a little in the play room. Mum had some snacks made for us. My tape recorder mic is broken so Mel took it home to fix it. He’s so nice and funny, such a nut. He flips me. We had tons of fun. Mum and Dad are just great. They invited everyone to come over for hamburgers on Sunday if they want. After the guys left, Mum took us over to Donna’s to spend the night, and we dreamed together. Mel! Mel! Mel! He kissed me goodnight too!!

Dear Diary, woke up at Donna’s about 8:15. We were supposed to wash cars for the freshman car wash, but I sort of had laryngitis for a while. Donna was plugged up too, and her parent’s car had a flat tire. Oh well. Mel called me at Donna’s, and he sounded sick. He’d planned on going to the car wash to see me and get his car washed, but since we didn’t go that didn’t happen. Corrine went and washed cars with Vince Larson who everyone calls Moose. She likes him. He said he’d meet her at the dance on Friday. I don’t know if he initiated that or if Corrine is being pushy and imagined it. Mum picked up Donna and me, and we went to Christown Mall. I got capris and a blouse for tomorrow. Mel went to the movies tonight. Oh well…

Dear Diary, it’s 5:30, and I’m still hoping Mel will call. I still have Francais devoirs. Have to conjugate a bunch of verbs. Ugh. Easy but boring. No one came over today for hamburgers. Evan had to go to work at 1:00. Donna and I went to the Fox Theater to see Move Over Darling with Doris Day and James Garner. Pretty funny. We (family) might go see Four for Texas tonight. So that’s all. FLASH: Mel is coming over at 7:00!! Ernie and Donna too.

Dear Diary, normally I love school, but not Algebra. It’s first period so I’m late a lot and that doesn’t make Mr. Levitz any too happy. I’ll be lucky to get a B in the class. I got a B on the test today, but I’ve flunked two tests and gotten an A on one and another B on one. Other than that, school wasn’t bad today. I discovered one of my girlfriends, Sharon Pritchard, is going with a senior I knew back when I was in 3rd grade and he was in 7th. She’s bringing him to the school wrestling match tomorrow. We’ll talk over old times when we were kids. Walked over to Corrine’s after school. Mel was there. He’s so sweet. He’s going to the wrestling match too. Moose invited Corrine to a hayride on the 25th so I guess it’s for real. She likes him for sure.

Dear Diary, this day started out good for one reason…looking forward to seeing Mel at the wrestling match after school. I now know I should have been more understanding, but I’m pigheaded. He was in a real bad mood, and I got angry with him. He wasn’t his usual sweet, funny self which irritated me. He hardly spoke, eyes on the match the whole time. I saw Sharon on the other end of the bleachers, and I would’ve gone over there but Mel wouldn’t get up. One of the freshman boys sitting behind us played with my hair for a while, telling me how it felt like silk. Even that didn’t get any reaction from Mel. He drove Corrine and me home, and I wouldn’t sit by him. I didn’t even kiss him goodbye. I hopped out of the car and slammed the door. When I got in my room, I cried. I’d stop for a minute and then think of how selfish I am and cry more. I felt like hell. When he called, relief poured through me so I could hardly talk. He’s depressed. We talked from 8:00 to 10:00. He thinks deep about life and things, and it depresses him. I know exactly how he feels. This makes me love him more. I sure hope he feels better.

Posted by Brenda Whiteside at 9:27 AM