Have you ever experienced dèjá vu? Have you walked into a room and felt you’d been there before but hadn’t? Or met a stranger, yet you felt you knew them? In Secrets of The Ravine, The MacKenzie Chronicles, book 1, my hero, Zac Peartree has those moments. They lead him to believe he has some connection to a decades-old crime. These photos are of the real-life Arizona town that inspired my fictional town of Joshua, Arizona. Here’s an excerpt from the book: 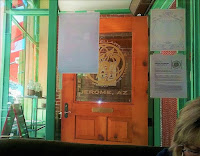 Outside the cantina, Zac browsed along the window displays of jewelry and art stealing glances of Magpie as she strolled away, toward the Apparition Room in the heart of Joshua. He wasn’t ready to go back to the hotel but didn’t want to share with her where he intended to go. He’d not told her about his visit to The Ravine earlier. Whenever the subject of the discovered body came up, her mood darkened, and she grew quiet. Besides, he had his own dèjá vu quandary he hadn’t figured out yet. 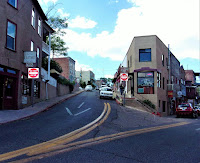 As she disappeared around a corner, he headed down Cutway Street on a sharp decline and in the direction of The Ravine. The sun, a memory fading behind the mountains, left the air with a sharp bite. Why he wanted to look on the site once more mystified him. After hearing Magpie had lived in The Ravine, and her father still lived in the same house, he’d had a strong desire to visit with this new knowledge. He hurried, as what little light left would soon be gone. 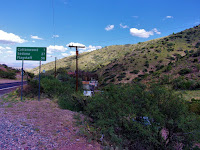 Instead of following the road around the bend, he left the sidewalk, cutting between two buildings, hoping for a viable shortcut. The descent wasn’t terribly steep, and as he cleared the structures, he could see the mishmash of houses below in The Ravine. No one fenced their properties so ducking around and between houses didn’t present a problem. Within minutes, he spotted the little wooden house with the neon peace sign and the house where the man had waved from the dormer window. He paused. 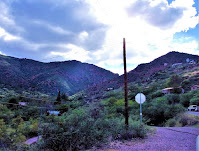 Three vehicles, headlights on and engines running, blocked a visual of the victim’s burial site.
At this distance, and in the dimming light, all he could make out were five people, but not who. Phoenix cops? Two crates, or maybe plastic boxes, were loaded into a van. Everyone got into the cars, and doors slammed. He shivered. The vehicles bumped along, headlights jogging crazily over the rough road and houses, as they made their way out of The Ravine. The van and a car continued when they hit pavement toward the highway and Phoenix, while another turned left toward the switchback leading into Joshua. He pulled his coat tighter. The engine noises faded. The quiet of The Ravine engulfed him. 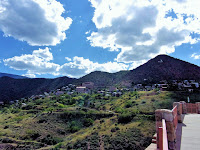 Even if the body was identified as Mark Donaldson, he doubted Magpie would experience closure. In a short time, he’d come to know that much of her personality. If after all of these years the disappearance of her teen love still affected her—and that was obvious by her actions—she wouldn’t be content. She’d insist on understanding how he died and why he ended up in an unmarked grave. Was he somehow involved with Callie’s murder and met the same fate? Or had he wandered into the middle of the woman’s murder and been killed as a result? Zac wanted the answer.

Lights came on in the house with the dormer; jarred the quiet from his head. That home kept drawing his attention.

He jumped at the voice behind him and whirled around.

“Oh! You,” the woman blurted then stepped back.

He could’ve said the same thing to the drunken female from the night before. Irene something. Maybe Blake.

“Didn’t mean to startle you.” She brushed gray strands of hair from her plump cheeks.

“I didn’t hear you.” He wasn’t on a road and wondered where she came from. “You live here? Am I on your property?”

That didn’t explain her reason to creep between houses at dusk, and in an area that didn’t appear to be a prime spot for home sales. 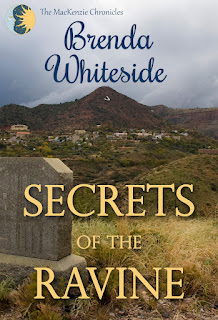 Blurb from Secrets of The Ravine:

The lies can haunt. The truth can kill.

When a ringer for her long-dead love walks into her life the same day skeletal remains are unearthed, Magpie MacKenzie can’t ignore the universe’s warning…solve the mystery or become the next victim.

After Lawyer Zack Peartree visits purportedly haunted Joshua, Arizona, he’s instantly drawn to the free-wheeling shopkeeper. His attraction thrusts him into a dangerous present embroiled in her past.

Using clues from her father’s life and Zack’s déjà vu moments, the couple plunge into a treacherous race to save love and avoid a murderous fate.

Find out more about the book here:

Posted by Brenda Whiteside at 8:10 AM

Email ThisBlogThis!Share to TwitterShare to FacebookShare to Pinterest
Labels: inspiration, Muse Monday, Ripped from the pages, romantic suspense, Secrets of The Ravine, suspense