Wickedly funny characters are the best kind of wicked. Penny Goetjen has written just such a character.

Some characters drive the plot forward or create tension in the story. Others provide comedic relief for the tension that’s created. The latter is the role of Millie, mother of protagonist Victoria Sands, in The Woman Underwater. And she’s a Wickedly Funny character. 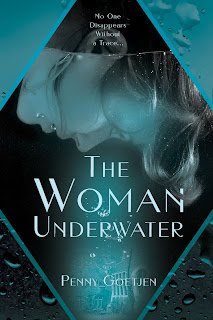 Torn between hanging onto the hope her husband is still alive, after his disappearance seven years earlier, and the desire to move on with her life, Victoria is caught in an undertow of unanswered questions, submerged in a watery vortex—one that no one can predict how it will play out.

Exhibiting early signs of dementia, Millie is unpredictable at best and agonizingly energy-zapping at her worst. But in all her quirkiness there’s an amusing—often entertaining—side of her.

For Millie, there’s nothing that a good strong cup of tea can’t fix, but there are times when a good belt of bourbon is in order—neat with an aromatic cigar.

She pulls together one-of-kind outfits, often with an exaggerated animal print, snug leggings and oversized fake pearls in the mix, while Victoria wishes she would dress more appropriately—like the time she visited her grandson’s private boarding school. Upon her arrival, however, her grandson gushed over her outfit, only encouraging her outlandish style.

A casual conversation might go something like this after Millie enters the kitchen with a life preserver strapped to her torso, carrying a couple of paint cans:

Victoria: Mom, what’s on your agenda today? [She learned early on not to say anything like: “What are you doing?” so as not to put Millie on the defensive.]

Millie: Why? Does the life preserver throw you off?

Victoria: Yeah, one of the above.

Millie: Don’t be, honey. I just thought it would be fun to wear. Haven’t had a reason to for a while.

Victoria: [She isn’t going to point out she still didn’t have one.] So how about the paint?

Victoria: [Opening the oven door to toss in a couple trays of cupcakes] Yeah, you’ve got a can of paint in each hand.

Millie: Oh! I forgot about those. Look at that.

Victoria: [Waiting for her mother to continue but when she doesn’t, adds] And?

Millie: Yeah, I don’t know. I must have had a good reason, but I can’t think of it now. I found them in the garage. Oh well. I’ll put them back. Maybe it’ll come to me. [She heads out of the kitchen but in the opposite direction of the garage.]

Victoria: [Contemplates following her but then remembers to set the timer on the oven.]

Millie: [Popping her head back into the kitchen.] We could paint the driveway.

Victoria: [Nearing spraining her neck to catch her mother’s expression.] Paint the driveway?

Millie: Yeah. I’ve found a couple of pretty colors here. [She raises the cans for Victoria to see.] I think there might be a few more we could use too. Just think of it. You could have the only driveway in the neighborhood that’s actually pretty. We could paint flowers and make it look like a garden.

Victoria: But Mom, that paint won’t wash off. How about using chalk?

Millie: That’s the whole point. With paint, it will last.

Victoria: [Struggling for the right words.] I…like the driveway the way it is.

Millie: [Scrunching up her face like a two-year-old before a tantrum.] But I don’t. [Her face brightens.] I think there’s some black paint in the garage. If you don’t like it when I’m finished, you can just paint over it. [With that, she disappears through the door to the garage with Victoria at her heels.]

In the seven years since Victoria’s husband disappeared, no witnesses have stepped forward and no credible evidence has been collected—not even his car. He simply vanished from behind the stone walls of a private boarding school where he taught—the same school their son now attends. But someone has to know what happened. And that someone may be closer to Victoria than she realizes.

National award-winning writer Penny Goetjen is the author of six mystery and suspense novels, her latest The Woman Underwater released 7.26.22. A self-proclaimed eccentric known for writing late into the night by the allure of flickering candlelight, she often weaves a subtle, unexpected paranormal twist into her stories. When her husband is asked how he feels about his wife doing in innocent people with the written word, he answers with a wink, “I sleep with one eye open.”