I wrote this on Friday and didn't get it posted before I headed off to do a bit of Black Friday shopping. I went to one store with my coupons. My intention was to run in, grab a couple of things and get the heck out. I didn't go early to avoid the rush of madness. Ha. Stood in line at the check out for and hour and a half with my measly little purchase. What I'll do to save a buck! So here's the post finally.

After Thankful Thursday, it's Fried Friday on Tortuga. We hosted the family and friends Thanksgiving dinner yesterday. No way would I face the crowds before noon today. Besides, we took to the farm on a shoestring budget, Christmas follows the same guidelines. It's never been about the presents for me anyway. But I do need to get busy on gifts. We've made quite a few already. I have a few items to buy and then I'll get the rest put together.

The seasons of the earth are magical to me. I bought a book on Winter Solstice. We're going to resurrect some original traditions and put our own twist on the season. For one thing, there really are twelve days in the season and I'm all for celebrating for twelve days! The Christmas traditions had their start with Winter Solstice origins from the tree to the yule log. I want to know the why and go from there.

No definitive plans yet on what this farm will look like next year. We did find out conventional financing is out of the question. There are government loan options but not until next year. We have to have a viable year and plan in action before submitting. Kind of the old saying - takes money to make money. We'll figure it out. We're pretty resourceful.

Christie wants to make goat cheese. We'd like our own goats but not sure when. Goats as pets are pretty easy and not too expensive to keep but if you want good milk goats, there is considerable expense. We also want chickens. Both are on our list. But they fall below farming more land. 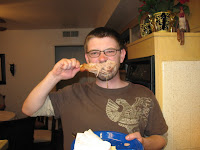 Our major expense for this year is at least out of the way. We now have a back up hand pump for the well. If we were to lose electricity for any length of time, people and plants would be dead on the vine. So tick that one off our list. The next major expense is the tractor and a greenhouse. I have my own little major expense wishes like new carpeting and flooring but since those don't generate any income, no one else has them on their list.

Frank got the watering system winterized. We have grass now in all areas of the yard which is sort of like winterizing - keeps the mud down that the dogs bring in during the winter.

We'd like to clear the land before the tumbleweeds start blowing which is right around the corner. Without a tractor or the very least a ride on mower, we can't do it without hiring it done. So...looking into that.

And while researching my current book, I learned American antelope aren't really antelope at all. They're pronghorn, the only surviving member of an ancient family that dates back about twenty million years.

Posted by Brenda Whiteside at 7:10 AM