No Dining at a Farmer's Table 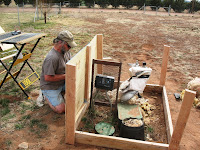 To tell the truth it's not been a week since my last Tortuga Thursday update. I'm writing this one early since we're headed out of town tomorrow for the river and three free hotel nights in Laughlin, Nevada. I'll have limited Internet access. And I'll be oblivious to what's happening on the farm anyway so may as well log my update today.

The tiller broke. Not everything that's been happening is good. This refurbished tiller was a happily received wedding present for Lance and Christie. It's seen a few hours here but gave out on the last pass through the fourth quadrant. Hopefully, a friend Lance knows in Flagstaff can repair it. We have a great neighbor that will loan us his to finish up.

That same neighbor has the tractor attachment he borrowed to run over all the land again. Not only do we have some veggies sprouting inside in trays but the weeds are sprouting at a faster rate outside. Good neighbor.

Frank got the pump house built. Not really a house. More of a cover. But much needed. 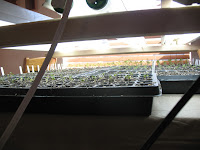 The trays covering the dining table and the table behind the couch are showing signs of green. They are such tiny little things. No wonder last year we had trouble with some of them. Lance has rigged some lighting over the trays. No big dinner parties for us for awhile. This year, everything will start in trays in the house then get moved to the greenhouse next month.

The sweet potato slips will arrive late May and will go directly in the ground. Last year we had a late frost that really damaged our potato growth. Keeping fingers crossed that isn't the case this year. 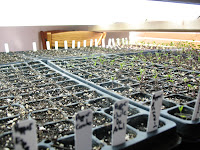