Dealing With a Demanding Muse by Laura Strickland


MUSE MONDAY
Hi Readers! Please welcome my guest today, Laura Strickland.
When I began to contemplate my topic for “Muse Monday”, I realized just what a bossy Muse I have.  She (and yes, my Muse is definitely a “she” even though she sometimes speaks in a decidedly male voice) has all the patience of a two-year-old on a sugar high.  She takes no excuses, accepts no delays, wants everything NOW, and will scream at me if I don’t listen.

And yes, like any weary-worn mother I do stop whatever I’m doing and listen, because, after all I really do love her and she always has such very good ideas.  The trouble is she all too frequently rolls them out when I’m busy doing something else – shopping or driving to work, preparing dinner or (sadly, far less frequently) doing housework.  And once she shares the germ of an idea, I’m infected and can’t think about anything else.

I’ve had the outlines for complete novels descend upon me while I’m scrubbing the bathtub.  I’ve had entire plots blossom in my mind while I’m folding laundry.  My Muse has spat out pages of conversations between characters at me when I’m supposed to be straightening a closet.

And that brings up another peculiarity of the writer’s life: people talking in my head.  Usually, when folks admit they hear voices, those around them grow concerned.  They exchange questioning glances and mention terms like “over work”, “counseling” and even “mental breakdown”.  They tend to think steps should be taken.  But for a writer, having people talking, posing and even acting out complex scenes in her head is standard operating procedure.

Once one of my stories is well and truly launched and sailing on the seas of creativity, it takes on a life of its own.  The characters cease to be entirely imaginary and – if things are really going well – assume control of their lives.  They make their own choices, disastrous and otherwise, act out scenes regardless of whether or not I’m in a position to observe them, and carry on conversations even when it’s impossible for me to write them down.  It’s truly maddening, because at that point I don’t want to miss anything.  It makes me wish I could just sit like someone visited upon by the phenomenon of automatic writing and scribble it all down.  But as I’ve told my Muse, I have a life.

So what’s a writer with a bossy Muse and self-absorbed mental tenants to do?  Well, I’ve been known to scrawl plot twists and conversations on the backs of receipts in the car, and I routinely struggle to remember what happens next till I can get somewhere and jot it down.  Crazy?  Yes.  Enjoyable?  Oh, so much!  And I wouldn’t want it any other way.  That’s why my advice to those musing on a successful writing career is: listen to the bratty two-year-old no matter how mad her ideas seem.  That’s what I did, when she talked me into writing about Robin Hood’s daughter.  The rest, as they say, is history. 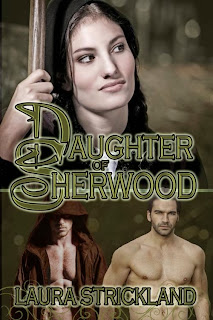 Raised in the kitchens of Nottingham Castle, Wren has no idea she is the daughter of the legendary Robin Hood until she is summoned to Sherwood Forest.  Since Robin’s death many years before, the resistance against Norman tyranny has been upheld by a magical triad, but now one of the guardians has died.  With two young men, Sparrow and Martin, Wren must form a new triad with a bond strong enough to defend Sherwood’s magic.  To one of them, she will also give her heart.

From the moment Wren bursts into his life, Sparrow loves her.  But he knows she may choose his lifelong rival, Martin, as her mate.  Martin wants Wren also, but Sparrow fears Martin is driven not by love but ambition.  When Martin is captured and held at Nottingham Castle, will the conflict between love and duty destroy the triad?


Connect with Laura on her web site: http://www.laurastricklandbooks.com/
Posted by Brenda Whiteside at 3:00 AM