Getting Fearless with Gloria Marlow


FEARLESS FRIDAY
My guest on this Fearless Friday is Gloria Marlow. Gloria shows us how being fearless is a relative thing...
Fearless has never been a term connected with me. So I don’t have any long, lengthy stories to tell. If I had told my sister I was posting on Fearless Friday, she would have laughed. She was always the fearless one, not me.

It’s rather coincidental that just last week, at Thanksgiving dinner, she asked me why I never road four-wheelers with her and our baby sister. My answer? I was scared. My cousin’s answer for me? I was reading. Both answers were totally right.  I was reading and I was scared.

I often let my fear of consequences override my desires. I’ve always told myself it’s better to be careful than go full steam ahead with whatever I want to do. But the past few years, I have tried to be a little less careful.

Five years ago, I turned forty and became a grandma. There is nothing quite like being a grandma. Not only are grandkids the greatest thing ever, it is really pretty liberating.  The start of my liberation may have come a year or two before that, during a trip to the Florida Keys. We were in a boat, pretty far from land, in deep water, and I actually got in the water and snorkeled. Now to a lot of people that might not sound all that big a deal, but to me, who has let her common sense, her weight and her fears rule quite a lot of her life, it was huge! I didn’t get eaten by a shark. I didn’t drown. (I’ve been swimming since I was a kid so drowning isn’t really usually something I’m very afraid of, but that water was deep.) The boat had a ladder so I wasn’t stuck in the water forever.  None of the bad things I’d envisioned actually happened, and it was the most amazing thing I’ve ever done.

Since then, I’ve done a few things here and there that I’ve always wanted to do, but was held back by fear. They were small things, like singing in church again, being a guest speaker at a ladies’ breakfast, and joining a writer’s group. I even learned to walk sedately from the porch to the car, in the dark, without running like the hounds of hell were after me.

The most recent fearless thing I did was ride Space Mountain at Disney World. Yes, I know six-year-olds ride it every day. When I was young, I did, too. Even when my kids were young, I did. But somewhere I long the line, I thought of the dangers, what could go wrong, and the consequences of what could go wrong. From that moment on, those fears kept me off of it, and any other roller coaster, for at least a decade, maybe longer. I just accepted that I would never ride again. It sure wasn’t on my list of things my husband and I would do while we were at the Epcot Food and Wine Festival. But one night, we ventured over to the Magic Kingdom because I wanted to shop on Main Street, and before I knew it, he’d talked me into riding Space Mountain. I made it out alive, and it was the most exhilarating thing I’ve done in years!

The thing I tell myself is this – I might never get this chance again, and even if I do, it will never be this exact moment in time. Maybe because time becomes more precious as we get older, I’ve come to realize I don’t want to waste a moment. I don’t want to pass up experiences based on what are usually rare or imagined dangers.

That being said, I don’t ever intend to bungee jump, parachute or walk over hot coals, so Disney World roller coasters and snorkeling is probably as fearless as I’m ever going to get.

Be sure to check out Gloria's latest release, When Swallows Fall. 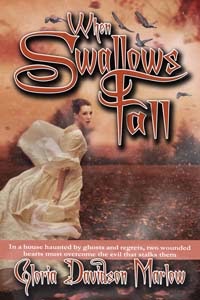 Visit Gloria at:
www.gloriamarlowbooks.com
Posted by Brenda Whiteside at 3:00 AM