CONQUERING MY FEAR OF HEIGHTS - by Vijaya Schartz

FEARLESS FRIDAY
If you missed Vijaya's post the first time around, here it is again. I thought it was good enough to run a second time. Enjoy!

I like to challenge myself, always did. To conquer my fears as a child, I forced myself to do whatever scared me the most. Eventually, I earned a reputation as a thrill-seeker and a daredevil. One fear I could never quite conquer, however, was my fear of heights. At a very young age, I remember clinging to the railing on the platform of the top catwalk of the jungle gym at summer camp. Despite a good balance, coordination, and athletic dispositions, I couldn't get the courage to walk it. Later, as an adult, I could not stand at the edge of a cliff without feeling the strong pull of gravity buckling my knees, dizzying my head, thwarting my balance, threatening to bring me down. The pictures of workers having lunch perched on the steel beams of a skyscraper under construction made me sick to my stomach.

Since then, I went through therapy with a hypnotherapist. She led me through past life regression. Apparently, my fear of heights is rooted in how I died in my previous life. This hypothesis resonates with me. According to what I saw and said under hypnosis, I was a Native American woman, banished from the tribe for giving birth to a child from a white man. The tribe killed the child then forced me off a cliff. I can still smell the fear, the blood, feel the rage directed at me, the anger. I remember the warriors advancing upon me, forcing me back at spear point. I remember tripping backwards, the endless fall. But most of all, I remember the pain, as my broken body lay bloody on the rocks at the bottom of the precipice, among animal carcasses. I was still alive and suffered for days, abandoned, alone, in unbearable pain, before the end came.

To confirm this new information, I researched the tribe from the images seared in my subconscious and discovered it was the "Black Feathers" a tribe of the Crow Nation. And I recognized the white cliffs with the trees hanging from the vertical walls on photographs, and images of driving buffalo to stampede off the cliffs, a hunting method favored by the Crow... in Alberta.

That ghastly death would certainly explain my fear of heights today. I did some exercises, forcing myself to look down while walking at the edge of my second story patio. My reaction to the heights faded somewhat, but when I stopped the exercises, the fear returned. It's rooted in a very deep emotional trauma. 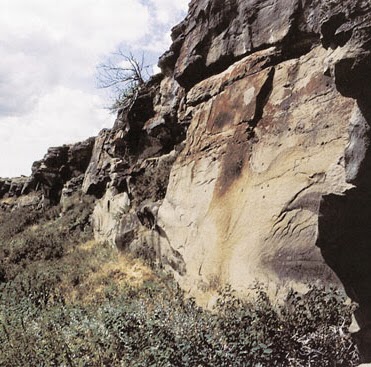 During a white river rafting trip in the Grand Canyon, on the Colorado River, we went exploring on foot, and our guide led us to a platform at the top of a cliff. As usual, I couldn't walk to the edge or look down. But below was a deep water pond, and water is my favorite element. The game was to jump off the cliff, into the water, wearing a life jacket (as we all did on this expedition). They asked for volunteers. I decided to attack my fear of heights, like I did other fears as a child. I raised my hand.

Since I could not look down, I didn't get to the edge. I took as many steps back as the flat area allowed, then started running as fast as I could, yelling at the top of my lungs. Heart pounding, I ran off the cliff into a free fall. I was airborne. What a thrill! Landing in the water was invigorating. On the picture, my jump doesn't look that scary because of the angle, but it was about five stories high, and for me, quite a victory.

I don't know if I would do it again, but I proved to myself that I could do it, and, although I still get rubber legs when I look down from the edge of a drop, I know I can master my fear in a pinch.

In my present life, I write fearless characters. In Checkmate, the hero's teenage daughter is also afraid of heights, and she has to climb the open stairs of the Eiffel Tower in Paris to rescue her father. I could really tap into my fear of heights in that scene. One of the scariest for me to write.

I write strong heroines in science fiction romance, and medieval fantasy settings. Girls with guns or swords, daring, fearless, with human flaws and a big heart. You can find my eBooks everywhere, and my paperbacks on Amazon and Barnes & Noble. Wishing you all, a Fearless Friday.
Vijaya Schartz
Blasters, Swords, Romance with a Kick
http://www.vijayaschartz.com
Amazon: http://www.amazon.com/author/vijayaschartz
B&N: http://www.barnesandnoble.com/c/vijaya-schartz
FB: https://www.facebook.com/vijaya.schartz
Twitter: https://twitter.com/Vijayaschartz
Posted by Brenda Whiteside at 3:00 AM