Gun Research Got Me Hooked

Garlic harvesting is now a reality, so for a few weeks, my writing career takes a backseat to farming. Post-War Dreams, my 1945 historical, is awaiting a release date. I signed the contract, just this morning, for A Legacy of Love and Murder, the third book in the Love and Murder Series. I've been hard at work on the fourth book in the series. But...my farming hat is in place for a couple of weeks. So, this is a post from a few months ago.

Researching for a novel takes many forms. Some are much more exciting than others. 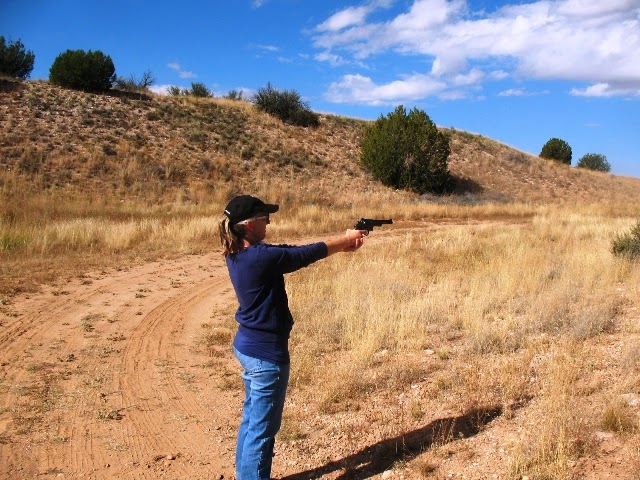 Last week, my son took me shooting. I'm not a gun person, never even held a gun. The trouble is I write about murder, some of which involves guns, and I decided it was time I had personal experience firing a gun.

I was nervous. What if my hand jerked and I shot something I shouldn't? What if my aversion to guns got me so scared I couldn't pull the trigger? This research was one of those chores I knew I had to do, but wasn't sure I'd enjoy.

We drove a few miles from our farm, out beyond the last house, down a dirt trail that inclined sharply into a wash and up again, requiring four-wheel drive. A small hill was our backdrop for the boxes he'd brought for our targets.

I started with a 357 Magnum Smith and Wesson using 38 special ammo. He first taught me about the gun, gun safety and then the mechanics of firing it. I put in my earplugs, took my stance and squeezed the trigger. I nearly hit the center. Then again. Just off center. Hey, that was fun.

I moved on to a 38 Special Smith and Wesson, bobbed and snubbed. That was a fun little gun to shoot. I also shot a 22 rifle and a 20 gauge, side by side, double barrel shotgun. All fun. And my son couldn't get over how accurate and steady my aim was - first time out. I'm hooked. I didn't expect to come to an understanding of why gun enthusiasts find enjoyment shooting at a target. It's one of those activities you can't explain unless you've tried it.

A great deal of research can be done on the Internet.  I'm lucky to have done quite a bit of traveling so I can draw on that for my settings. There's nothing like firsthand knowledge to lend credibility to my writing. Handling a gun now gives me the experience my heroine might need when the villain is around the next corner.

Posted by Brenda Whiteside at 7:02 AM