Brewing and Stewing with Voices in My Head

Today, I'm all over the place with my musing. Inspiration struck me last week, and I'm anxious to get going on my next book...but...I need to decide on the time period.

My sister is taking me for two days in Jerome, Arizona. Jerome is a ghost town turned artsy mecca that clings to the side of Cleopatra Hill in the Mingus Mountains. In the 1920s 10,000 people populated the area, but when the ore dried up the town was abandoned. By the 50s, the town had shrunk to about 100. Slowly, a mix of artists and wanderers settled there and by 1967 it was being settled by people known as hippies. To this day, an eclectic mix of residents, still artsy and free-thinking, have made their homes there. The population hangs just under 500 and is a tourist stop.

My initial thought was for a romantic suspense with a dash of mystical set in the 1970s. Keep in mind, I'm not writing about 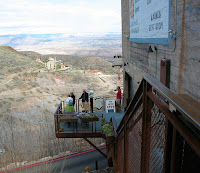 the 70s, but the story I envision would be suited for a less techy time period and people who reside slightly outside of conventional norms. I want to plunk my characters down in Jerome. The city will make a great backdrop for the stories.

I'm excited about the stories brewing in my head, but my muse tells me to hold up until I know what
era before I take the get-it-on-paper plunge.

I'd love to hear you opinion.

Meanwhile, I'll keep stewing on the idea.
Posted by Brenda Whiteside at 10:45 AM