#Cooking Up a #Mystery by Cornelia Kidd 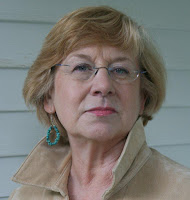 It's always interesting to see where a story originates for an author. Cornelia Kidd, aka Lea Wait, is sharing how her latest came about.

About eighteen months ago my agent asked if I’d be interested in writing a new mystery series set in Maine. I was already writing two mystery series, both under the name Lea Wait, but this new series would be under a new name.

Was it time to re-invent myself? Why not? I chose the name ”Cornelia Kidd,” the maiden name of my paternal grandmother, and dove in. I’d already set two mystery series in Maine – one along a tidal river (the Shadows Antique Print series), and one in a working waterfront town (the Mainely Needlepoint series.)

So I decided that the new series, which the publisher was already calling the Maine Murder Series, would be set on an island; an island connected to the mainland by a drawbridge, so it wouldn’t be too isolated.

Protagonists? I’d always had one main character (albeit with friends and relatives) but this time I decided to have two. Two sisters who had never met, or even heard of each other, until chapter one of the first book in the series, now titled Death and a Pot of Chowder. Anna would be in her thirties, an islander by birth and heritage, married to a lobsterman and the mother of a fourteen-year-old. Her sister, Izzie, was twenty-three, had grown up in Connecticut, recently graduated from the Culinary Institute and, oh, yes. Her mother was Korean American.

Add in a murder (of course,) some conflicts (naturally,) and a happy ending ... until the second book in the series. Include recipes. I’d never written a culinary mystery and this seemed the right time. And because I love connections to the past, so does Izzie, and each chapter includes an old quotation or recipe from a nineteenth century book on cooking and housekeeping.

Death and a Pot of Chowder debuted last week. And Anna and Izzie will be back next year. 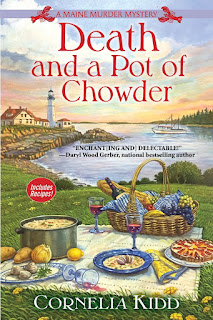 Excerpt from Death and a Pot of Chowder

No Quarry Island fisherman had been lost at sea since I was five or six. Everyone on the island had been at that funeral. I hadn’t known the fisherman whose sternman hadn’t been able to haul him up after his foot caught in the trapline that pulled him overboard. But I never forgot his story.
Every May I cried during the Quarry Island memorial reading of the names of every man who’d been lost at sea since a boy had been hit by a book and knocked into the rough North Atlantic in 1689. It was a reminder that island life was challenging, and the sea couldn’t be trusted.
“Maybe they’ll find him,” said Izzie. “Maybe he’ll be fine, and waiting for you at home.”
Izzie didn’t know lobsters and ropes and waters. “Maybe.”
I wasn’t usually the praying sort, but this wasn’t a usual day. I kept saying Carl’s name over and over in my mind. He had to be all right. He had to be.
But I was a lobsterman’s wife. I lived on an island. I knew the odds.
They weren’t good.