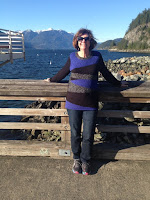 Let's welcome back Judy Penz Sheluk. Her author journey is ongoing, and what a journey it's been. Enjoy the tale!

It was a Friday in the winter of 2003 when I was called into the office of the VP of Sales, a representative from HR sitting smugly by his side. I knew what was coming: Rumors had been running rampant regarding a massive company downsizing and restructuring, the result of ever declining sales of high-end office furniture following 9/11. I faced a future of looking for another job in the corporate world or finally following my dream of becoming a writer.

Common sense dictated the former. I had twenty-plus years of business experience, primarily in management roles, and always in finance. My writing credits, on the other hand, included a few unsold short stories crafted in creative writing workshops, and exactly one acceptance: a column in Antiques & Collectibles Showcase about my husband’s collection of antique clocks, for which I was paid $75 and three copies of the magazine.

Payment for that article arrived on the very day I’d been given my pink slip. Some might have found it ironic, laughable, even. I viewed it as an omen. The time to follow my dream had come.

By 2012, I’d managed to carve out a successful second career as a freelance journalist and magazine editor. And yet, something was missing.

I found the answer at Bloody Words, a now defunct mystery conference held in Toronto in June 2012. I went as a reader and a fan, and left knowing that I wanted to write a novel. I already had a world created for it, based on a short story written in yet another creative writing class. How hard could it be?

Plenty hard, as it turned out. But I persevered and in 2013, after a dozen drafts and several hundred hours, I was ready to start the submission process for The Hanged Man’s Noose. I thought a decade of publication credits would smooth the way.

They didn’t, but I persevered, and in July 2014 I signed a contract with Barking Rain Press for Noose. By November, I’d had two short stories published in two different anthologies, World Enough & Crime and The Whole She-Bang 2.

My writing journey hasn’t always been easy, but even in my darkest hours it’s never felt like work. And I never could have or would have done any of it if I hadn’t taken a chance back in 2003.

And so, in February 2018, I took another chance, this time by setting up my own imprint, Superior Shores Press, and yet another by deciding to publish a multi-author collection of short mystery stories. The Best Laid Plans: 21 Stories of Mystery & Suspense, was released in June 2019 to excellent reviews. With that done, and A Fool’s Journey, book 3 in my Marketville mystery series set to release on Aug. 21, I was ready to take a well-deserved vacation. Fate had other plans.

In July 2019, Barking Rain Press emailed its authors, illustrators, proofreaders, and editors with news that it would be closing. Authors would be paid any royalties owed, but we were on our own for recreating filed and cover art. And so, that month, I set about doing the work involved to get Skeletons in the Attic and A Hole in One re-released under the Superior Shores Press umbrella by the first week of August.

I don’t know what lies ahead, none of us do. But I hope I continue to be fearless, even when I’m scared.

Bio: Judy Penz Sheluk is the author of the Glass Dolphin Mystery and Marketville Mystery series, and the editor of The Best Laid Plans: 21 Stories of Mystery & Suspense. Her short stories can be found in several collections. Judy is also a member of Sisters in Crime, International Thriller Writers, the Short Mystery Fiction Society, and Crime Writers of Canada, where she serves as Vice Chair on the Board of Directors. Find her at judypenzsheluk.com.

New Release (A Fool’s Journey): In March 2000, twenty-year old Brandon Colbeck left home to find himself on a self-proclaimed “fool’s journey.” No one—not friends or family—have seen or heard from him since, until a phone call from a man claiming to be Brandon brings everything back to the forefront. Calamity (Callie) Barnstable and her team at Past & Present Investigations have been hired to find out what happened to Brandon, and, if still alive, where he might be. As Callie follows a trail of buried secrets and decades-old deceptions only one thing is certain: whatever the outcome, there is no such thing as closure.

Find Judy’s books in trade paperback and e-book at all the usual suspects, including Amazon