Leaving It All Behind by Alice Renaud #FearlessFriday #FantasyRomance 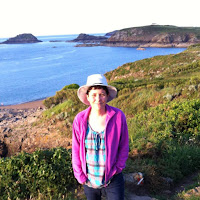 I’ve always liked the Fearless Fridays feature on Brenda’s blog. I love reading about people taking risks and getting way out of their comfort zone. I’m quite cautious by nature – well I was an accountant for 24 years, and am now a compliance manager, hardly devil-may-care occupations! I’d always wanted to do a Fearless Friday spot, but was racking my brain to find one example of brave or risky behaviour in my past.

Then I realized that I did get out of my comfort zone, when I was 26. I moved countries!

I am French, and was born and brought up in Western France, a beautiful area called Brittany (see the blue sky and sea behind me?) I studied in Paris and worked in Paris after my graduation. In 1997, I had been living comfortably in central Paris for 4 years. I had a nice flat, a good job, friends, and a young man I was keen on. I thought he was keen on me, too…
However, something in me wasn’t settled. Strangely, in all the time I spent in Paris, I never bought a bed. For 4 years I slept on a mattress on the floor. Every time I thought about buying a bed, a voice in my head whispered, “Why bother? You might not be here for long.” 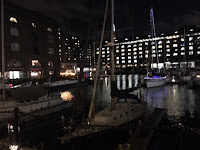 Then the company I was working for at the time offered me a job in their UK subsidiary, in London. It was a good opportunity, but I was torn – mainly because of the young man. I spoke to my mum, who said, “Go for it! You can always come back. If the relationship is serious, it will survive.”
Wise words, mum. So at 26, I left flat, friends and young man behind, and moved to London.

The day I moved into my new London flat (it had furniture and a bed!) was a bright, sunny spring day. On the busy street outside, two middle aged ladies were trotting towards the shops. They both wore pink tutus, and had gauze wings on their backs.
And nobody, nobody, batted an eyelid. I thought, “Hey… I like this!” In Paris people would definitely have stared, or said something.

The first months were not easy. The new job was more challenging than the one I’d had in Paris, I had a lot more responsibilities and had lost my support network of friends and colleagues. It took me a while to find new friends and build a new life. But something told me that I’d made the right choice.

It turned out the Parisian young man wasn’t that keen after all. But I met another young man, a Londoner. We’ve been married for 14 years now and have a 10-year old son. And I love London more each day. It’s truly my home.

My first fantasy romance novella, A Merman’s Choice, was published in January 2019 by Black Velvet Seductions. It is inspired by the landscapes and legends of Brittany, where I grew up. The second book in the series, Music for a Merman, was released on 1 November. The hero, Rob Regor, also gets out of his comfort zone. He’s a shape shifting merman who leaves his home and his people to live among humans and work as a policeman. The experience changes him in ways he could not have imagined, and leads him to meet the love of his life, the human eco-warrior Charlie.

Get the book here: AMAZON:  https://amzn.to/2ZkU5wR
AND OTHER GREAT PLACES: https://books2read.com/u/mdG7Bw

A bit more about myself

Alice lives in London, UK, with her husband and son. By day she's a compliance manager for a pharmaceutical company. By night she writes fantasy romance about shape shifting mermen, water monsters and time-travelling witches. Her first book, “A Merman’s Choice,” was published in January 2019 by Black Velvet Seductions. It is the first book in a fantasy romance trilogy inspired by the landscapes and legends of Brittany and Wales. The second book, “Music for a Merman,” is out now. Alice has also written a short story, “The Sweetest Magic of All,” included in the BVS “Mystic Desire” anthology, out now.
Alice loves reading and writing stories, and sharing them with anyone who’s interested!