In the Book, a #series is Born 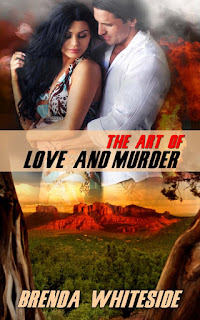 This is where the series began...Lacy's search to know her birth parents, Flagstaff, Arizona, and a quest that uncovers secrets, threats, and murder.

Way back when, I wanted to write a story of love and murder. Murder in the name of love. Unrealistic love that drives a person to murder. Obsessive desires that mascaraed as love. My series took shape.

The setting for the first book, The Art of Love and Murder, needed a location as beautiful as Lacy and as rugged as Sheriff Meadowlark. Flagstaff, Arizona is nestled between the infamous Route 66 and the 12, 633 feet San Francisco Peaks.

When Lacy Dahl’s research uncovers secrets about the mother she never knew; secrets that dispute the identity of her father, she finds herself on the edge of disaster.
Sheriff Chance Meadowlark is still haunted by the murder of his wife and the revenge he unleashed in the name of justice.  When he meets Lacy he is determined not to become involved, but their pasts may make that impossible.  As they move closer to the truth, saving Lacy may be his only salvation.

Lacy begins to think the present is more important than her past...until Chance's connection to her mother and a murder spin her deeper into danger and further from love.  Will the truth destroy Lacy and Chance or will it be the answer that frees them?


For two weeks, you can get the first book in the series for $.99 at the following eBook stores:

AMAZON
BARNES AND NOBLE
APPLE iBOOKS
Posted by Brenda Whiteside at 6:13 AM

Email ThisBlogThis!Share to TwitterShare to FacebookShare to Pinterest
Labels: In the Book, inspiration, romantic suspense, The Art of Love and Murder