What a wickedly fun post I have today from guest Talia Logan. Read on and enjoy! 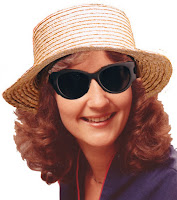 In my younger days, I did some wickedly cool stuff in the name of research for my books. I got up at 4 a.m. one morning to head to the St. Marys River in St. Marys, Georgia, to board a commercial shrimp boat for the day. One of my characters was a shrimper, and I wanted the whole experience.

Yeah. I spent most of the ride in the cabin, seasick.

Then I spent a weekend in a house full of Navy SEALs in Pensacola, Florida—not as wicked as it sounds, trust me—but interesting, to say the least. But one of them who’d become a friend of mine via ICQ (one of the first chat rooms when the internet was just a baby) talked me into skydiving. So a couple of weeks later, I met him in the Georgia countryside where I watched a 30-minute video on the inherent dangers of skydiving, got myself all suited up in a black jumpsuit, and we boarded a small plane to head into the blue skies. When we hit 13,000 feet, my SEAL friend opened the door of the plane and disappeared. The tandem master hooked himself to my back, pushed me to the opening, and pushed again.

The next thing I knew, I was plummeting toward Earth at 120 miles an hour. I’ve lived in the southeast most of my life and been through a dozen hurricanes, and the wind ripping at my face felt like I was in the middle of a Category 3 storm. All I remember is screaming at the top of my lungs, which I could feel, but couldn’t hear, with the roar of the wind in my ears.

After about sixty seconds, he pulled the cord, and the chute opened, jerking us up (which divers will tell you isn’t what really happens, but that’s what it feels like) and we drifted through the air at a leisurely, calming pace, peering at the landscape.

And I started to get airsick (kind of goes along with the seasick thing. Are you seeing a pattern here?)

“Are you going to be sick?” he asked.

He shoved a barf bag in my face. “Here. So it won’t splatter on me.”

I never did puke, but the one thing that’s always stayed with me about the experience is the intense silence up there. There were no sounds of planes, traffic, or even birds chirping. The only noise was an occasional rustle of the parachute in the breeze. It was the most incredible thing I’ve “never” heard. And I’ll never forget it. In fact, twenty-five years later, I’ve started considering a re-do. But we’ll see.

The moral of this tale? I wanted to share that experience with readers, and Deadly Chance was spawned. The heroine does make a tandem jump with the hero. 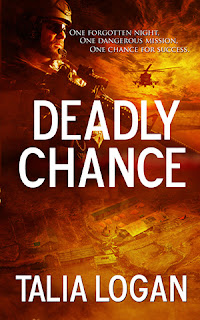 Blurb:
Photographer Tempest Raines is devastated when her adult son is snatched by Russian rebels. With her own deeply buried secrets, in her desperation to rescue him, she turns to Navy SEAL Chance Adams who reluctantly agrees to help her. But how much will she be willing to give of herself, and the truth, to save her son?
Because even if they all survive the mission, when Chance learns about her past, Tempest might be better off dead.

Excerpt:
Chance shoved away from the chair and went to the bedroom, tapping lightly on the door. “Tempest?”
He tried the handle, and the door opened. No answer, but the bathroom door sat slightly ajar. He went over and heard water running. He knocked and raised his voice. “Tempest!”
“Go away.” Her voice streamed through the sound of the shower.
He pushed open the door and stepped into the steamy room. “Tempest.”
Her voice tight, she said, “Get out of my bathroom, Commander. Now.”
“No. We’re going to talk.” He grabbed the curtain and scraped it across the rod.
She shrieked and reached up to pull it back.
He kept his hand on the bar, kicked off his shoes, and climbed into the tub. Water splashed over him, drenching his clothes. He ran his hands down her sides, then slipped his arms around her back and pulled her closer. “You already took a shower.”
She shoved at his chest.
He kept his grip, sliding his hands along her slick, soaped body. Water cascaded over her, her hair drooped against her shoulders in wet bunches. He leaned near her ear, resisting the urge to nibble, as the continuous stream pelted his head. “I’m sorry. It just surprised me. I don’t believe you would do that.” The tension slinked from her muscles.
She shifted her hands on his chest, but no longer pushed. “You need to go. Please.”
He didn’t move. “We still have a lot to do.”
“In the shower?”
He pressed against her. “I’m comfortable here.”
She bunched up a bit of his shirt in her hand and squeezed out water from the material. “Your clothes are soaking wet.”
He slid his hand to her shoulder, then behind her neck. His lips close to her ear, he whispered, “Then I guess I’ll have to walk around here naked until they dry.”
She slapped at his chest, forcing him away. “You are an insufferable jackass. Get out of my tub.” She reached behind her and turned off the water.
He let his hands slide off her body, but took his time, lingering on her hips. “I’ve had a lot of insults hurled at me, but I don’t believe anyone has ever called me an insufferable jackass.”
A growl spurted from her, and she yanked a towel from the rack, wrapping it around her curves. Without comment, she climbed over the edge of the tub and tromped into her bedroom.

Bio:
Talia Logan is the pen name for an award-winning author of thrillers, but Talia writes romance. Her alter ego isn’t a secret, but she does want to keep her genres separate.
In her stories you’ll find heartbreak and joy, maybe a little intrigue, and always a happy ending. She writes from the porch of a Chesapeake Bay-front home, where the seagulls caw by day, the waves crash by night, and the moon casts a sultry glow over the dark waters.
Okay, maybe that’s fiction, but she can dream.