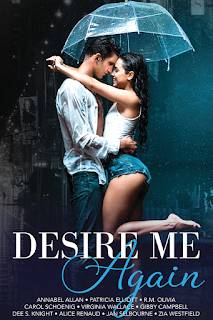 Recently, because of an anthology I’ve been part of, I’ve been inspired by the muse of second chance love. Honestly, the idea of giving someone a second chance at a romance is something that makes me smile. Too often, people feel an attraction when they aren’t ready. They part. They grow. They change. Why shouldn’t they get a another shot at love that has also changed and grown? That’s the basis of the new Black Velvet Seductions anthology, Desire Me Again.

My story is about two high school sweethearts who are separated but come together fifteen years later. He’s been wounded in the Middle East wars and she’s been damaged by a tragedy that struck very soon after they went their own ways. I guess my muse for the story itself was having met my hubby in high school. We dated on and off (he went to school in a different town far from me) through sophomore and junior years. My senior year, we moved out of state and I didn’t see him at all. But we were at least in the same state for college, lol. It’s that kind of love that holds on, though distanced and through good and bad times that I find inspiring and a muse for a good story—especially one that deals with having a second chance.

There are ten of us in the anthology, each with a very different take on what second chances look like. I hope you’ll enjoy!

Sandy Henderson had been a sweet, wholesome girl in her first year of college, sure of herself and totally in love with her high school sweetheart, Tom Pritchard. Then something happened that shattered her dreams, her confidence, her will to live. When she meets Tom again many years later, she resists taking a chance on love because of her secret, but Tom won’t give up on her. On them. Or will he, once she tells him about her past? 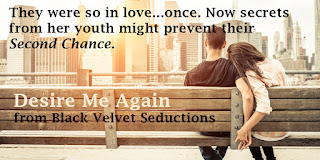 “Tom,” Mrs. Henderson exclaimed. Like everyone he knew in their town, she stretched the one-syllable word into two. Tah-um. Until he’d joined the Corps he didn’t really know what people meant when they talked about southern accents. Now he considered the soft consonants and extended vowels charming. Part of being home.

Glancing over her shoulder, Tom saw Sandy stick her head around the kitchen wall. “Hey,” he called out to her. Then concentrating on her mother, he held out a bouquet. “These are for you, Mrs. Henderson.”

She flushed like a schoolgirl when she took the flowers. “How did you know that tulips are my favorite?”

He hadn’t.  He’d asked the florist to put together something cheerful that an older lady might like. He hoped the brightly colored blooms might bring a smile to Sandy, too.

“Just a guess,” he answered.

“Come in, come in,” Mrs. Henderson backed up and held the door wide.

He stepped into a living room that had seen very little change in the last two decades. It was neat but held a slight whiff of shabbiness. Mrs. Henderson would probably call it comfortable rather than shabby. Tom wondered what Sandy thought of it.

Finally, the woman in question emerged from the kitchen, wiping her hands on a dishtowel. The night was warm and she looked as though she’d just finished doing dishes. Her hair was damp and stuck to her forehead, and a light sheen of sweat clung to her cheeks. His groin tightened when he noticed that her shorts hugged her hips and her sleeveless blouse was slightly dampened, too, showing her white bra through the thin fabric. His mind filled with ways he could make her body slick with sweat, the ways he could make her much more than warm.

“I know I said we should try to get together before I leave, but I didn’t actually mean tonight.”

“I’m sorry to barge in, but I wanted to ask you to dinner tomorrow night.” Before Sandy could form “No, thank you,” as her lips where shaping up to do, he interjected, “And your mom, too.”

Her mother’s eyes widened and she slapped the hand holding the tulips to her chest. “Oh, my! Sandra, we have a beau!”

Sandy smiled. Then she turned to him. “I don’t know. We have so much to do here.”

“Sandra, please. It will be so much fun. I haven’t had dinner out since your father last took me, and that’s been…at least three years.” She turned to Tom. “Could we go to that cafeteria up on the highway?”

Tom laughed. “We can go anywhere you want.”

Mrs. Henderson snapped her head back toward Sandy. He knew the minute Sandy gave in. Her shoulders slumped slightly, but she smiled at her mother. “If Tom is willing to make every other man in town jealous by escorting the lovely Henderson women out to dinner, who am I to stand in his way?”

Posted by Brenda Whiteside at 9:11 AM