The Problems of Romance by HM Thomas #romance #NewRelease

I am thrilled to have as my guest blogger today, HM Thomas. You all know I'm an author. You might also know I'm an editor. This year, in addition to my free lance editing, I'm editing for Champagne Book Group. HM Thomas is one of the authors I am privileged to work with. Her book, What We Deserve is the first of the books I've edited to be released. So sit back and enjoy learning how she came to write this great romance.

I love romance novels. I love the buildup and the big bang and the happily ever after, but I can’t just do straight romance. I like struggles. I like problems. Sometimes those problems come from the couple’s own issues. Sometimes they come from someone else’s lies or attempts to break the pair apart. Sometimes it’s their occupations or their past. And sometimes it’s a whole host of these things together. I’ve been accused of liking to make my characters bleed (sometimes literally), but I like to think I give them a nice payoff.

When I first began writing my novel, What We Deserve I had just returned to my hometown and was teaching English in a nearby high school. Eventually it hit me that at some point, I’d probably teach the children of my former classmates. I wondered what that might be like. Would the daughter of the perfect princess from my high school days be just as perfect as her mother had been? Would the son of the jock shun sports and instead lose himself reading in the back of my class? What if the same people who made my teenage years hell ended up with children more like the girl I had been than the teenagers their parents had been? But then those questions got me thinking – what if the stakes were higher? What if I wasn’t just interacting with these young people as a teacher? What if there was more at stake than grades? I explored these questions in my novel.

In What We Deserve, Miranda Lawson is a therapist returning to her job working with victims of traumatic events.  Her return puts her working side-by-side with her ex-husband, Detective Logan Pearson. An ex that she has never gotten over. Her first big case involves the assault and possible rape of a girl with ties to Miranda’s past. A past she’d hoped to keep buried. Although drawn to the girl, Miranda is torn between keeping her own secrets and uncovering the girl’s. Throw in the sparks still between Miranda and Logan, the fact Logan recently slipped up and slept with a rookie and a whole lot of stubbornness, and you can guarantee there will be some bloodshed before the characters get the happily ever after they deserve. 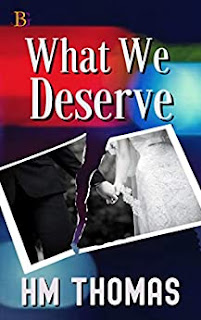 Two years ago, victim therapist Miranda Lawson lost everything after an assignment left a victim dead and her marriage in shambles. Now, she’s determined to get her former life back, including her old job and possibly her ex-husband.

Detective Logan Pearson’s job is the only thing he’s managed to not screw up in the past few years. Until he realizes the mystery woman he slept with is a new recruit, on the same day his ex-wife returns to their precinct.

Miranda’s return proves both treat and trial as the two realize their divorce has done nothing to diminish the fire still burning between them. When a girl arrives at the station beaten and mute, Miranda realizes a nightmare from her past now threatens her future. She and Logan must overcome the pain of their pasts to start again and ensure everyone gets what they deserve.

Terror kicked in Miranda’s chest. “What do you hope to get from this?” She didn’t need to ask, but she needed to keep the girl talking. Sophia wanted the rapist to pay. She wanted him to be as terrified and helpless as she’d been. Miranda crossed the threshold.

Sophia shook her head. “Stay out, Miranda. You’ve been good to me. I don’t want you to see what I have to do.”

“Sophia.” She sharpened her voice, her stern “cut the bullshit” voice, but the girl didn’t even glance her way. “You don’t have to do anything. He admitted he raped you. No one will doubt you now. This whole nightmare is over.”

“You’re right, it is.” She sounded distant. Defeated. “I can’t get away from what he did to me. I can’t eat, sleep. I can’t even look at myself. I shower with my eyes closed.”

She’d said these same things during their sessions.

“You’re still beautiful.” The girl had been quietly, classically beautiful before the rape. Over the past year, her inner strength had carved her into a woman with wise eyes and a beautiful smile. “He didn’t change you, Sophia. You’re still as special as you ever were.”

Her patient’s hand tightened on the gun. “No. He ruined me. The girl I was is damaged. She’s dead.” Her gaze flickered to Miranda for a split second. She squeezed the trigger.

Miranda froze as the bullet pierced Bobby Blair’s skull. Blood splattered the headboard behind him. Footsteps pounded up the staircase.

She swung her gaze to the victim turned vigilante. The desperate girl already held the gun to her temple.

HM Thomas combated her perfectly normal childhood by creating her own drama and excitement on paper. By the time she entered college, she’d been a creator of horror, mystery and suspense, but it wasn’t until her own Happily Ever After that she delved into romance. Now she’s convinced each of her characters needs one as well, no matter how much she might torture them in the process.

When HM’s not writing, she enjoys traveling and exploring new places with her husband, three children and rescue dog. On a good day, she can be found in a comfy chair with a book. On a really good day that chair’s in the sand or by a campfire.

What We Deserve is her second novel.