Do you love Regency? There's some wickedly good stories out there you'll want to read. Welcome Rue Allyn to tell us about them.

Thank you, Brenda, for the chance to share a little about my writing and latest publication. Before we get to my story, Wait for Me, I’d like to give a little background about The Bluestocking Belles—authors (along with a few friends) of the Storm & Shelter novella collection.

Several years ago, I was invited to join a small group of authors, who call themselves The Bluestocking Belles. I was honored because several of the members are on my ‘always read’ list. Each of the Belles has her own publishing career, but together our purpose is to write the best researched, most entertaining Regency era novellas to be found. We succeed at that ambitious goal more often than not. The next collection being released on April 13, 2021 is Storm & Shelter, and I think it is among the best our group has ever produced.

The Belles’ collections are distinguished by the cooperative background created for all the stories in that collection. Previous collections have been set in an English house party, the 1814 Frost Faire, the environs of Bath England, and now for Storm & Shelter, a rundown inn in the once prosperous village of Fenwick on Sea situated on the east coast of England. This area is noted for its ferocious storms, so of course we had to include a storm as part of the setting. Researching the setting, the climate, the problems and benefits of a town on the cusp of rebirth was tremendous fun, and led to the discovery of the most likely characters to get stranded at the inn. The array of characters sheltering at this inn include lords, ladies, a blacksmith, a school teacher and her students, a couple of captains of commercial vessels, a fence of stolen goods, one or two military officers, a gossip columnist, and a pirate traveling incognito. The pirate—she would say she’s a privateer—is the heroine of Wait for Me. 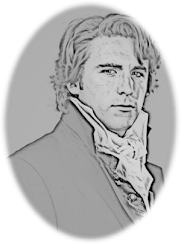 Why did I choose a pirate? To explain that, I must go back several more years to when I was with a
publishing house and my editor wanted me to write a series about some dukes. Dukes at the time were wildly popular and therefor overdone. I and the rest of the reading public were getting a bit tired of them. I offered instead to write about a trio of Duchesses. The first of those stories became The French Duchess. The next in the series—which I had not thought much about—would be The Pirate Duchess. Inspiration for that book finally struck when the Belles decided to create Storm & Shelter. My lady pirate turned out to be an orphan raised by a pirate and trained to succeed him. But she makes him a deathbed promise to discover who she truly is. That promise, leads her to Fenwick on Sea where, according to a diary, her mother was married. She is there to get a copy of the church records and hopes they will lead her to her ‘real’ family. So, Wait for Me became a sort of prequel to The Priate Duchess. I’m still working on this duchess story, so I can’t tell you when it will be available. What I can tell you is that authors as talented as Bluestocking Belles just about guarantees any collection they produce is first rate in every novella as well as the connecting pieces. If you’d like to learn more about The Bluestocking Belles you can find us here. 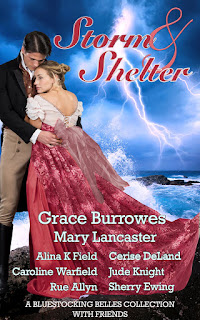 About Storm & Shelter: When a storm blows off the North Sea and slams into the village of Fenwick on Sea, the villagers prepare for the inevitable: shipwreck, flood, land slips, and stranded travelers. The Queen’s Barque Inn quickly fills with the injured, the devious, and the lonely—lords, ladies, and simple folk; spies, pirates, and smugglers all trapped together. Intrigue crackles through the village, and passion lights up the hotel. One storm, eight authors, eight heartwarming novellas.

Storm & Shelter is available for pre-order at a reduced price until April 13, 2021 when it is officially released and price goes up.

About Wait for Me: Esmeralda Crobbin, aka the pirate Irish Red, and Captain, Lord Brandon Gilroy were enemies by nature who first met during a battle at sea. But fate trumps nature when a fierce storm creates a chance encounter and forced proximity. Brandon learns the pirate is a woman of serious honor and responsibility. Esmeralda discovers the captain is more than a uniform stuffed with rules and regulations. Both love the sea with boundless passion, but can they love each other?

About Rue Allyn: Award winning author, Rue Allyn, learned story telling at her grandfather’s knee. (Well it was really more like on his knee—I was two.) She’s been weaving her own tales ever since. She has worked as an instructor, mother, sailor, clerk, sales associate, and painter, along with a variety
of other types of employment. She has lived and traveled in places all over the globe from Keflavik Iceland (I did not care much for the long nights of winter.) and Fairbanks Alaska to Panama City and the streets of London England to a large number of places in between. Now that her two sons have left the nest, Rue and her husband of more than four decades (Try living with the same person for more than forty years—that’s a true adventure.) have retired and moved south.  When not writing, enjoying the nearby beach or working jigsaw puzzles, Rue travels the world and surfs the internet in search of background material and inspiration for her next heart melting romance. She loves to hear from readers, and you may contact her at Rue@RueAllyn.com.  She can't wait to hear from you.

Keep up with all the news about Rue Allyn and deals for her books, Sign up for Rue’s News quarterly newsletter here, and receive a free download.