Please welcome Steven J. Kolbe to Discover... I'm so pleased to have him as a guest for Muse Monday with a very insightful post. Enjoy!

Since the advent of the noir, crime novels and shows have been filled with deeply flawed detectives. Sometimes this comes in the form of heroes who are less than moral. Other times it comes in the form of a mental quirk. Recent examples include a CIA officer with bipolar (Homeland), a police consultant with OCD (Monk), a private eye with tourettes (Motherless Brooklyn), and more active- and recovered-alcoholics than you can shake a stick at. While writing about a mentally defective detective can seem appealing, there are a few things you should consider first.

A mental illness is not the same as a moral failing. I recently found myself helping a student check out a library book. He had settled on a book about serial killers. “Interesting,” I said. “Yeah, the killer was bipolar,” he replied. I nodded understandingly. “You know, people with mental illnesses are more likely to be the victim than the perpetrator of violent crimes.” He was astonished by this widely known statistic. Don’t be like my student and conflate “crazy” with “evil.” If your hero needs to overcome something, it should be their own stubbornness or shame about their illness.

People with mental illnesses aren’t magic. I can remember vividly watching Homeland and my initial reaction. Claire Danes portrays Carrie Mathison, a CIA officer with bipolar I, the most severe form of the illness. Her manic episodes galvanize and propel her successfully through her international investigations, so much so that she frequently throws out her medication to turn on her connection-making superpower. While mania can produce extended periods of productivity, Mathison’s bipolar superpowers felt contrived for the sake of the plot. They also sent, I thought, a dangerous message: leaning into your madness unleashed your true genius. In the end, Mathison’s illness progresses so far she must receive electroconvulsive therapy. In Danes’ portrayal, we see some of the most extreme symptoms and treatments of the illness, plus a little magic.

Most people with mental illnesses are ordinary. In fiction, recovered alcoholics frequently stare longingly at bottles they can’t drink, depressives lie motionless under mountainous blankets, and the otherwise unhinged twitch and tick outwardly for all the world to see. Don't let their diagnosis flatten your characters. They're real people too! 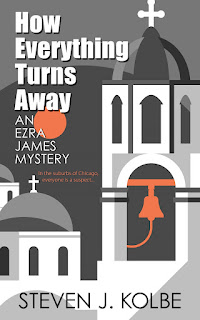 EXCERPT of How Everything Turns Away

“Other than finding the real Coast-to-Coast Killer?” Fr. Remy asked.

“Finding the real killer is my only hope of being exonerated and getting back to normal, but there’s something else I need to do.”

“You have to take your medication, Ezra.”

The priest shrugged. “What will this prove, getting off your medications?”

“You were at your most unbalanced when you were not medicated. Or have you forgotten? Do you need me to play the tape?”

Once, after his incident at the café, Ezra called Julia at home. She didn’t answer, so he left a message, a three-minute message filled with a rambling, breathless rant, clocking in at two hundred and fifty words per minute. He sounded like a drunken auctioneer. Ezra passed on the miniature tape to Remy to play for him if need be.

“If you get your old job back,” Remy continued, “you think Julia will come back?”

“She didn’t want to have children who are, you know, disturbed. If I can show her I’m sane, it will change everything.”

“There is nothing you can do about your DNA. Even if these genes were not expressed in you, you could still pass them down. She knew about your past, she met your mother, and she still married you. There is something else there.”

Ezra shook his head. “Can’t you see how this would solve everything?”