Villains with personality disorders are fascinating. DeeAnna has such an interesting take on it. Read on!

Narcissus. Remember him? Handsome young hunter whose father was a god and mother a water nymph? In one popular version of this piece of Greek mythology, (there are many), the poor boy spurned an advance from Echo, a mountain nymph. She was so devastated at being rejected, she faded away until nothing was left of her but a whisper. To enact revenge for his cruelty, the goddess Nemesis lured Narcissus to a pool of water. He had never seen himself and was so enamored he couldn’t bear to leave. And there he pined away—a flower which bears his name springing up in the spot where he died.

Adding insult to injury, his name is associated with a serious disorder, narcissistic personality disorder or NPD. NPD, along with other personality disorders usually obscure deep self-esteem issues manifesting from childhood. Unfortunately, the people hurt most by the disorder are the spouses, children, other relatives, and coworkers. These people are subjected to rage, lies, threats, and punishing manipulation.

Of course, not every jerk or prima donna hogging the mirror is a narcissist. But people with personality disorders are more common than people think. I know a couple of them personally and stay away from the toxic fallout. Following is an example of an NPD in the making.

A few years ago, a writer friend and I took turns selling our books at a weekly farmer’s market. A local cable station sent a crew to interview some of the vendors. When they got to our booth a woman with a handsome boy of about twelve walked up. The woman watched the interview, but the boy sidled into the back of our booth, making sure he was behind my friend, and full in the shot. He didn’t photo bomb the shot, he lifted his chin and moved like he was posing for a model shoot. He was dead serious about being seen and it was way creepy. Without knowing the family, I could tell they were in trouble with this kid. He just assumed it would be okay for him to be in a place he was not allowed and take advantage of something that had nothing to do with him. All the name of being seen and appreciated.

NPDs are big people users and control is important. Faced with a person who doesn’t see things their way, the afflicted person feels victimized. Any negative result from the disagreement is always the other person’s fault and the victim either slides into a rage or walks away in disgust. There is rarely a middle ground, or compromise. The person in conflict cannot win.

Once diagnosed by a medical professional, and the personality disorder is on record, the diagnosed person will often fight to have the entry expunged Their disorder does not allow them to believe there is anything wrong with them. It’s a misdiagnosis or outright lie.

Even if a person believes they have the disorder, they rarely get help. The road to a healthier mental life is long. Besides medication, years and years of psychological therapy is necessary.

This is the tip of the proverbial iceberg. Assigning a personality disorder to a villain is tricky. They can flow from scorched earth to mellow and back again with charming efficiency. 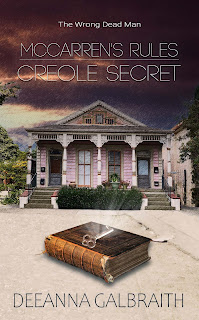 In my next release (4th quarter, 2021), Creole Secret, the reader is introduced to a handsome, charming character, Étienne Chappelle. One of my protagonists, Rippa, is smitten until she learns the truth about him.

Étienne turns full face toward us, and I have to admit he’s classically handsome. Reminds me of a trip I took with Raif to Florence where we saw the recently restored Michelangelo’s David. Étienne is tall with dark, curly hair in need of a trim, chiseled features, and a nice, lean, muscular body. As if some poor milquetoast of a guy unwillingly donated his share of maleness so the young gardener would be blessed with extra. I can see why Rippa is keyed up.

I don’t feel as generous. His outgoing vibe is one of posing. Of cocky assurance that he is the center of interest.

If you'd like to read book one in the series, you can find Angel Falls here: AMAZON LINK