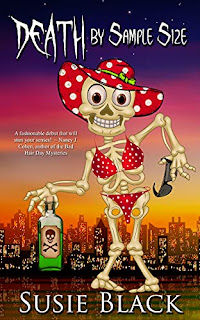 Everyone wanted her dead…but who actually killed her? The last thing swimwear sales exec Holly Schlivnik expected was to discover ruthless buying office big wig Bunny Frank's corpse trussed up like a Thanksgiving turkey with a bikini stuffed down her throat. When Holly's colleague is arrested for Bunny's murder, the wise-cracking, irreverent amateur sleuth jumps into action to find the real killer. Nothing turns out the way Holly thinks it will as she matches wits with a wily murderer hellbent for revenge.

I know nothing about the world of wholesale fashion sales, of designer swimwear, and the people who populate that world. Sounds pretty glitzy and fun. Ms. Black plunks the reader down in the middle of it, and once I got the lay of the land, I had an enjoyable read. I love character novels, and Death by Sample Size has a ton of characters to keep a reader happy. The book is clever and humorous. 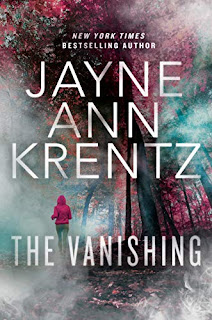 The Vanishing by Jayne Ann Krentz

Decades ago in the small town of Fogg Lake, The Incident occurred: an explosion in the cave system that released unknown gases. The residents slept for two days. When they woke up they discovered that things had changed—they had changed. Some started having visions. Others heard ominous voices. And then, scientists from a mysterious government agency arrived. Determined not to become research subjects of strange experiments, the residents of Fogg Lake blamed their “hallucinations” on food poisoning, and the story worked. But now it has become apparent that the eerie effects of The Incident are showing up in the descendants of Fogg Lake.…

Catalina Lark and Olivia LeClair, best friends and co-owners of an investigation firm in Seattle, use what they call their “other sight” to help solve cases. When Olivia suddenly vanishes one night, Cat frantically begins the search for her friend. No one takes the disappearance seriously except Slater Arganbright, an agent from a shadowy organization known only as the Foundation, who shows up at her firm with a cryptic warning.

A ruthless killer is hunting the only witnesses to a murder that occurred in the Fogg Lake caves fifteen years ago—Catalina and Olivia. And someone intends to make both women vanish.

I got the feeling this story was intended to be paranormal, and then I’d think it didn’t really want to go there. I had trouble getting vested in the characters. I can’t say the story was bad. I can’t say the plot was not well developed. I just couldn’t quite get into it. Sorry to be so wishy-washy, but the story kind of hit me as wishy-washy. But if you enjoy sort of paranormal people living amongst us and you like Ms. Krentz, you might enjoy it.