How fun...a WWII story that is also a paranormal suspense. Let's hear where Janet found her inspiration and all about the book. 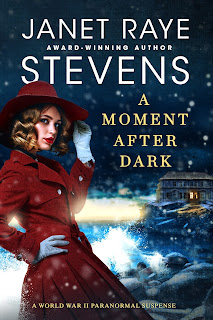 My new book, A Moment After Dark, a World War II-set paranormal suspense, is a culmination of both my interest in the odd and otherworldly and WWII history. Blame it on my childhood. As a kid, I loved TV shows like The Twilight Zone and especially the supernatural and soapy daytime drama, Dark Shadows. How I loved the spooky settings, gothic suspense, to-die-for costumes and hairdos, and vampire and unlikely sex symbol, Barnabas Collins! I also lived in a public housing project, populated for the most part by WWII veterans. Practically every dad, and some of the moms, had served in the war in some capacity. I grew up hearing their stories and became steeped in the history of that singular moment in time. When I started writing fiction years later, it made sense my life-long interests would inspire my stories, particularly A Moment After Dark, a historical romantic suspense with a paranormal twist, set in the first week of December, 1941.

A Moment After Dark blurb:

She sees the future with a touch. A powerful gift in a time of war.

The enemy wants her. The Allies need her.

When Addie Brandt touches someone, she sees their future, and it’s rarely good. Mocked and teased her whole life, Addie hides from the world in her family’s funeral home. But when her second sight shows her a horrific vision of an attack on the Pearl Harbor Naval base, the gruesome images are too intense to ignore, and she tries to raise the alarm. Will anyone listen?

Federal agent Jack Dunstan needs a miracle. He’s still reeling from the betrayal that nearly decimated his team of agents with paranormal powers, a vengeful Nazi spy with a terrifying ability of his own is out to destroy him, and he knows it’s only a matter of time before America is drawn into the war raging around the world. Hearing rumors of Addie’s vision, he seeks her out, hoping she could be the miracle he’s looking for.

Addie’s not sure she trusts Jack Dunstan. He’s rude, cocky, and insists on calling her curse of second sight a “gift.” But if she wants to save lives and prevent a terrible disaster, she has to put aside her fears and learn to embrace her ability.

With the US on the brink of war and an enemy agent hunting her for her power, Addie must learn to trust Dunstan—and herself—to stop an attack that could change the course of history.

A Moment After Dark Excerpt:

Addie Brandt, determined to raise the alarm about her vision of an attack on Pearl Harbor, goes to the police to report what she's seen—but it doesn't go as she hopes:

“What do you expect me to do?” Sgt. Gillis asked.

Addie’s frustration and anger threatened to boil over. “Can’t you call the Navy or the FBI or someone?”

“And tell them what? A fanciful girl thinks there might be an attack on one of our naval bases at some point in the future? I’m sorry, dear, that’s not what police work is. I can’t call anyone without something solid to go on.” Gillis held out his hand. “Or some kind of proof.”

She stared at his palm as if it held a bomb. Touch him? What good would that do? If the Sight showed her a vision, it would most likely be terrible. And whatever she saw might not happen for some time. She shook her head.

The sergeant frowned. “I thought as much. Why don’t you run on home, Miss Brandt, and forget this foolishness?”

Addie lost the battle to hold her temper. By golly, she’d do it.

Cool air tickled her skin as she stripped off a glove. Silence fell in the precinct. Addie’s hand hovered over Gillis’s and she cringed. She hadn’t held anyone’s hand since Mother’s, years ago, when the Sight showed her Mother was going to die.

But she had to. With the fate of so many hanging in the balance, she had to touch him.

She pressed her fingers against his. Instantly, darkness as black as pitch blanketed her mind. Horrific images flashed. Terrifying sensations beat against her brain. It took every ounce of strength she had to tear out of the Sight’s grip.

She opened her eyes to see Sgt. Gillis smirking at her. “Well? Where’s my proof?” he said.

Addie scrabbled her glove back onto her hand and shot out of her seat. The chair legs squawked against the floorboards. “I-I can’t,” she said hastily. “I’m sorry.”

“Crazy as a loon,” she heard one of the policemen say as she dashed across the room.

Burning with fury and humiliation, Addie flung open the front door and slammed into a wall. No, not a wall. A man. A powerfully built man, with shoulders as broad as an anchor filling his overcoat and a chest apparently made of iron. She looked up to see a face like Dick Tracy in the funny papers—all angles. Razor sharp jaw, full lips, crooked nose, black hair under a fedora perched at a rakish angle. And eyes the color of brown sugar. Curious eyes that kept her gaze a moment too long.

“Whoa, sister, where’s the fire?” he said, his voice as deep as the ocean. He smelled like the ocean, too. Fresh, salty-sharp, like he’d been born on Pott’s Beach.

She laughed bitterly. Couldn’t help it, after what the Sight had inflicted on her in the heartbeat she’d held the sergeant’s hand. Addie as Gillis, at the foot of a massive structure engulfed in flames. She’d ripped herself out of the vision before the burning structure collapsed and the scorching embers crashed onto her. Or Gillis, rather. But she knew with certainty the sergeant would die a fiery death.

Somehow, she made it around the big man she’d slammed into, mighty glad her hands were covered, and she couldn’t make contact with him. She’d had enough of the Sight for one day.

Besides, she did not want to know what could fell a Redwood tree of a man like him. 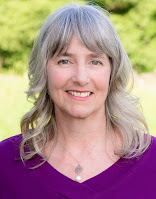 A Derringer Award nominee, Janet’s work has been recognized multiple times, including the Daphne du Maurier award and RWA's Golden Heart® award for Cole for Christmas. Janet writes mystery, time travel, paranormal, and the occasional Christmas romance with humor, heart, and a dash of suspense.

She lives in New England with her handsome better half and their equally impressive children.