Monday can wait. I didn't get to totally sum up the weekend's discoveries. Did I mention the gunk we cleaned up? Okay, yeah, but don't forget it. We worked hard and still didn't finish. If you were to spill something red and sticky in the pantry that splashed on the wall and dripped across the wire shelving, wouldn't you wipe it up before it dried? I'll move on.

I slept very little Saturday night. Maybe it was the air mattress or the quiet that was so quiet it was loud. Or maybe Rusty, who had his eye on us half the night, snored part of the night and moved from bed to rug to bed the rest of the night had something to do with my restlessness. Or maybe the million thoughts zinging in my head. Anyway, I knew without a doubt I couldn't let Bob come get Debra and leave me alone Sunday night. So we got up at 6:30am and dug in so we would both go back to Phoenix Sunday afternoon. We got it clean enough to move into. The rest could be finished whenever.

We worked until past lunchtime, packed up our stuff and Rusty and headed out to find Mexican food before the drive back to Phoenix. Wow did we find it. Side note here, I don't think I've mentioned. Paulden is small. There is one bar, one gas station and a post office. That's it. So down the road, eight miles south, is Chino Valley. There is only one main street, but on that street you'll find McD's, Subway, Sonic, Dominos, Pizza Hut, CVS, Safeway, two steak houses, a few bars, a couple of gas stations, the great Chinese diner and a couple of Mexican food places. But we found THE Mexican food place. It's an order at the counter place and there's no margaritas, which could explain the big take out business they do. The young gal behind the counter loves her job, speaks fluent Spanish and is small-town friendly. I will be frequenting this place often! Alfonso's - open 8 to 9, seven days a week.

I called Frank about the window problem. Made his day. He said he'd contact the realtor. The water pressure is odd. In the bathtub it's strong, in the bathroom sinks it's a trickle. Have to figure that out. We have a well. Never had one before. Could there be something to do with that? It may sound crazy, but I love the idea of having my own well. The idea of it is much more romantic than it actually is. There's no round, rock structure with a bucket hanging under a wooden eave. But still, we have a well...

Oh, and I haven't mentioned the built-in entertainment center. Back in Minnesota, there's a nine foot long, three-piece solid oak entertainment center Frank needed to move. What to do? Frank put it up for sale. The trade off is pathetic really. The built-in is not real hard wood. Phoney stuff. But it is built-in. Rip it out? Then how to deal with the carpet and wall? And the oak one is so heavy and big to get into the U-haul. Before I could change my mind and regret the loss, it sold. Just stuff - I have enough stuff.

Frank's computer is dying. Great timing. Retiring on social security in the middle of moving cross-country does not allow for new computers in the budget. Especially when I don't have a handle on the budget yet. No idea how much our new lifestyle will cost. I can guess - all electric, no water bill since we have a well, trash service. Then there is phone, television and Internet. Four adults in the house and splitting the bills. Nope, not a handle. Computer purchase will stall until after the moving bills have piled up. 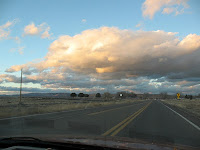 The drive into the sunset back to Phoenix is becoming a familiar lovely site. If you've not been to Arizona, we have some of the most dramatic sunsets. Fell into bed at my sister's Sunday night with the alarm set for 5am. Monday - carpet cleaner, well water questions, meet the neighbors, Christie sees her house for the first time and Rusty meets the other two dogs. Details next time.
Posted by Brenda Whiteside at 9:21 PM