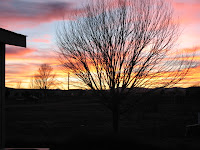 If you haven't been following my prairie posts from the beginning, you might not know why we embarked on this new lifestyle. The economic downturn hit us hard, Frank didn't think he'd ever retire and our son suggested we join forces and live off the land. We went on a hunt for a suitable house that offered enough space for two couples to live together but have their own areas and on enough land that we could raise our own fruits and veggies. And we could all afford. Here we are in Paulden, Arizona on a beautiful (but oh so dusty) prairie. And so like I said in the first post, we're doing this with nothing in the bank but love.

Putting five very different people together, happily, is not an easy task. The fifth one is a temporary house guest. Add to that two rambunctious puppies and a middle aged, spoiled only dog. Quite a combination. But we're finding our way.

Christie (my son's lady) wakes up giggling. I swear she does. Nothing gets to her - and more importantly - none of us get to her. So her number one strong suit is her upbeat personality. I'm jealous of her ability to sleep until 8:00. She's the last one out of bed in the morning. Maybe that's why she wakes up giggling. And she cooks - really, really good food. Since I hate to cook, she's special in my book! She brings to the household sunshine and cooking. 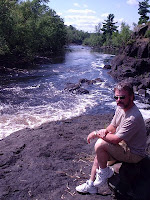 Frank (my husband) wakes up before Christie but after me. He's not as cheerful as Christie but not grouchy either. He's a jokester. Even when you'd like to get serious sometimes! Hint of annoyance from his wife. He's our inside project guy. He fixed all the windows, maintains the irrigation system and whatever else might come up. He doesn't "play in the dirt" but neither does Christie. And that's okay. He's also our senior member if that means anything. He brings to the table the willingness to research ideas and be a jack of all trades.

Brenda (hey that's me) is usually the first one up. And I'm rather driven at 5:30 am. I get the coffee on and fire up my laptop. I'm a control freak. Living with another couple is teaching me to let it go. No one keeps things as clean as I do. No one is as organized as I am. No one is as thrifty as I am. And the list goes on. I'm learning to deal with it - I hope. Otherwise, I'll go nuts and will never get my book written. I am the main housekeeper. I hate cleaning more than cooking, but it has fallen to me. Not that others wouldn't do it - but I can't wait that long! Mostly I'm easy to get along with. I bring to the table a willingness to work in the dirt both inside and out and handle the household budget and bills.

Have we had rough spots? A few. I imagine we'll have a few more. None of us are shrinking violets and we're all pretty mouthy. But we all share the desire to keep this little experiment going and to share a rich, full life with nothing in the bank (to start with) but love.
Posted by Brenda Whiteside at 10:01 PM