Not that the bad days had anything to do with the lifestyle change or prairie life, but still a dip in the up mood. Thursday morning I woke up after a fitful night, feeling like I'd been hit by a Mack truck. Swollen glands, headache, the whole bit. And Frank couldn't find his hearing aids. He has these super duper ones that the VA gave him because of his hearing disability. The hearing loss, caused by the Army not issuing earplugs at the rifle range, is significant. So we tore the house apart. For two days. It's now been several days and still no sign of them. Frank looked gray with worry for a few days.

My ickys passed by Saturday, but his hearing aids still remain lost. On Friday, he went to the VA in Prescott and they told him they'd replace them but he had to stand in line - expect them in about sixteen months! He called the doctor who tested him and prescribed them (not a VA doc), but he couldn't help. Monday, he'll call the VA in Minnesota where he got them and hopefully they'll have a better solution. Not like we can replace them at $5,000. I'm getting tired of repeating myself and listening to a very loud TV. 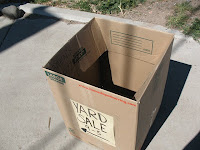 Last weekend, we went in search of an arts fair advertised in the local paper. It didn't exist. Probably canceled and no one bothered to change the announcement. Funny small town stuff. On our search, we rounded a corner with a cardboard box advertising a yard sale. I caught some writing on the inside flap - it was one of our boxes we donated to local U-haul. "Bren's Clothes"

Speaking of the local paper - it comes once a week. If we take the daily paper, we'd have to go out to the main highway. At least Rusty gets to collect the paper for us once a week. He loves his chores.

Our numbers are temporarily growing. Looks like we'll have two guests for a month or so. Lance's good friend is also moving to the area but hasn't got a job or a place to live yet. Scott will be moving in when Lance and Christie arrive to stay tomorrow. His cat, Debo has already arrived. Debo has been bunking in the garage since Christie is very allergic. Scott has been helping them move. He's a big, sweet, powerful guy, but he's kind of a bull in a china shop. First day, he's lugging in a mattress alone and knocked a picture off the wall and broke it. Next day, my door wreath met with his finesse. He'll be staying in L&C's half of the house. 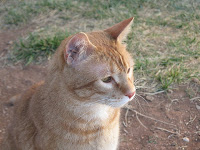 Rusty's afraid of Debo. He wants to play, but when Debo romps toward him, Rusty runs for the house. Big tough watch dog? Not.

Next week should be a whirlwind: Lance and Christie arrive for good, two new temporary members and my Virtual Blog Tour to promote Honey On White Bread. There's a grand prize at the end of the week.

Right now, this minute, I'm more consumed with the tour. By the end of next week, I'll have a better idea of how our communal living will work. Fingers crossed.

Click here for blog stops:
http://www.brendawhiteside.com/news.html
Posted by Brenda Whiteside at 9:49 AM